Welcome
Professor Mitchell sat at her desk, waiting patiently for her First Year students to arrive. It was her first time teaching, and she was rather nervous. She flipped through her plan for the lesson one last time, looking up as she heard her students begin to file in. “Come in, come in!” she beamed, standing. She waited until her students had filed into their seats before starting her lesson. “I am Professor Mitchell...”

Introduction
...and I will be your Transfiguration professor for your time here at Hogwarts. I am very excited to be teaching you and want you to know that you can always approach me with any questions that you may have. Feel free to also contact the course’s Professor’s Assistants. Transfiguration is a difficult branch of magic, but I have confidence that each and every one of you can and will succeed. First, let us go over your syllabus for the year: 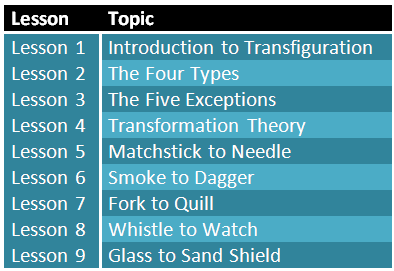 In terms of assignments, most weeks you will have a short ten-question quiz and the occasional extra credit essay.  These essays are optional and will not affect your overall grade in the course, but are an opportunity to get better acquainted with the course material and earn some extra points for your house.  In Lesson Five you will sit your midterm, covering the first half of the course, and Lesson Nine will be your final.  If you are a non-native English speaker or have a learning disability, please mark “NES” or “LD,” respectively, at the top of your essays and this will be taken into account when grading.  I also ask that you please refrain from using any identifying marks, such as your name, age, or house, in your essays.  This rule will be waived for your first essay, as it is meant to be an introduction, but points will be taken off for it in the future.  Additionally, copying and pasting answers directly from either the lesson or an outside source will be met with a failing grade and the inability to retake your assignment.

What is Transfiguration?
Transfiguration is a very precise and delicate branch of magic. It is the alteration of objects in our physical world. This is not just an alteration of appearance, however, but of the molecular structure of an item as well. Transfiguration is a very dangerous form of magic, as it is very easy to mess up. Should transfiguration spells of any kind go wrong, they can lead to catastrophic situations. When you are working with the molecules of an object, you are changing its basic principles. If this energy or change gets displaced or unfocused, serious harm could befall you and those around you. Now, molecules are defined as a group of atoms that are bonded together to create chemical compounds. These chemical compounds are what create everything in our universe, living and unliving. Individual things have different molecular structures that define what they are!

Transfiguration is one of the more scientific branches of magic, meaning there is a strict systematic approach in relation to the incantations and wand movements. This is why many people do not find transfiguration as rewarding as some other forms of magic. Most people have a hard time appreciating how particular it is and prefer things that aren’t quite as strict in principle. 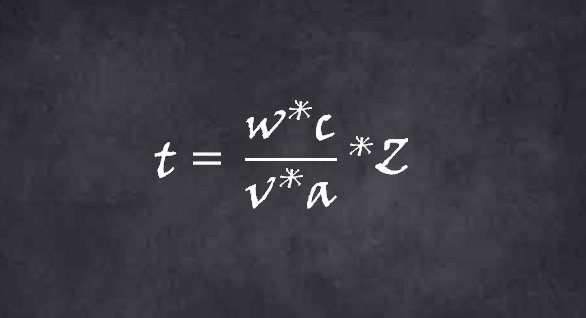 Above, you will find the Transformation Formula. This is an integral and essential part of the science of transfiguration according to some, though I disagree. The thought of math may have some of you heading for the door, but stop for a moment. Breathe. I am going to explain it, so don’t start panicking yet! First, let’s begin by saying that this is a theoretical formula. While some claim to use this formula to get an idea of the difficulty of a spell, it is not an actual mathematical formula meant to be solved for a hard value. The reason for this lies mainly in the nature of its variables, but I’ll explain that in a moment.  For now, let’s break down the formula and see if you can figure out what I mean from what the variables represent.

Before we go any further, I am going to be completely honest with you. The Transformation Formula is, as explained above, a theoretical formula. This goes beyond just the variable Z, which researchers have been thus far unable to identify (though we will come back to that in a moment!). Of the four known variables, only one of them is actually measurable. This is the mass of the starting object, which is defined by how much “stuff” there is in the object.  Though directly related to an object’s weight, mass is a slightly different measurement. You see, mass is an inherent property while weight depends upon the force due to gravity acting on the object. The three variables that cannot be measured are wand power, concentration, and viciousness because they do not have numerical values. Wand power is the strength of your wand and is influenced not only by the wood, core, length, and flexibility, but also by your relationship with it. I will explain concentration to you in more detail in the coming weeks, but in general it is how your mind focuses and directs your magic.  For the sake of transfiguration, viciousness is liveliness of the target object.  Though it may sound counter-intuitive, viciousness cannot be zero, even for inanimate objects.  The reason for this is that at the atomic level, there is always movement in an object.  The only possible way to have a thing with absolutely no viciousness is if that thing is at absolute zero, or zero Kelvin, where all atomic motion is stopped.  There are multiple theories as to what would happen if one tried casting a transformation on an object at absolute zero, however none can be proven as it is impossible to cool something to that temperature, even with magic.

How many of you have ever heard of quantum physics? Anyone? For those of you who don’t know, quantum physics is a theoretical type of physics. Its theories are hard to wrap your mind around and seem at first glance to hold little practical application. The Transformation Formula is much the same. It is a basis upon which people attempt to understand the science of transfiguration, quantifying what we can. No one truly understands exactly how transfiguration works, but they formulize the parts that they know affect it.  Due to the lack of exact knowledge of how transfiguration works and the difficulty in connecting the theoretical to the practical, the variable Z is placed in the formula. It is the one piece of transformation that no one can truly explain, though there are many theories. Some believe it refers to the complexity of life within an object, while others believe it is the molecular makeup of the object, and still others believe it is an individual’s aptitude for the spell or a combination of several factors. The Z variable is one of those concepts that both exists and does not exist simultaneously, as no one can pinpoint exactly what it is. It is one of the big mysteries of transfiguration.

Once you have all of the variables straightened out, you can get an idea for the difficulty of a spell using what you know and trying to balance the formula.  A larger “value” for the difficulty, t, means an easier spell, while a smaller value means a more difficult spell.  With this in mind, you can figure that if a target object has a large mass, adding more concentration will make it easier.  Conversely, if you know your wand isn’t the greatest with transformation spells, a less vicious target will be easier to transform.  Even without the numbers, we can get an idea of the relative difficulty of the transformation.  As you progress through Transfiguration, you will get a more intuitive feel for how to cast, what aspects need to be strengthened when, and what objects are more or less easy to transform to the point that you will not need to reference the formula at all.  It is merely a construct through which we try to understand the many mysteries of magic.

Dangers of Transfiguration
I’ve already told you that transfiguration can be dangerous, but now I feel it appropriate that we get into exactly why this is. This type of magic has many opportunities for things to go wrong - and disastrously so. This is a possibility for even the most practiced of transfigurists. This is why it is important that you do not try spells above your year. Attempting to cast transfiguration spells you have not yet learned is something that you will be severely docked for in assignments, as this is an extremely dangerous practice that will not be encouraged or condoned in my class.

When spells backfire or aren’t performed correctly, it can prevent items from completing their transfigurations. While this may not seem like a big deal when working with simple transfigurations, such as an apple to an orange, think about what this could mean when you get into deeper things, like human transfiguration. Can you imagine what would happen if you went to do a transformation to give yourself gills and it only worked halfway? Or if you were to try to vanish something and only managed to vanish half of it? Surely you can see the dangers here!

Conclusion
And that ends our first class! I hope you all enjoyed the lesson! A quick note - please do not stress about the Transformation Formula. It is not important that you fully understand it at this point in your schooling, as it will not be a focus in this course unless you choose to reamain through N.E.W.T. level. I look forward to seeing you next lesson!