11/25/22 - PA Applications will open January 1. Applicants should have completed all Year One assignments, including essays, and have at least an 85% in the course.

Welcome
Professor Mitchell was bouncing with excitement as the first years filed in. “Hello! Come in, come in. We have a very exciting lesson today. It’s going to be a mix of review to help you prepare for your final along with some new information and a guest lecture from your Defense Against the Dark Arts professor, Professor Penrose. I expect you to give him the same respect you give me.”

Introduction
Today is going to be a longer lesson than normal, but I still expect your full attention. We will start with the new content and then move into the review. This review will only skim the surface of what we covered in each lesson and is in no way meant to be all that you do to study.

Glass to Sand Shield
This spell will be taught a little differently, as the effects of the spell are actually debated. It falls under the realm of transfiguration, as glass is being changed into sand, though some argue it could potentially be a charm.

You see, when glass is broken and crushed into very, very small pieces, it actually becomes a form of sand, which causes some debate over whether or not the spell actually causes a transformation or just disintegrates the glass. I personally believe it causes a transformation, as it must cause a separation of the silicon and limestone molecules that make up the glass in order to create individual grains of these minerals present in naturally occurring sand. Additionally, both products can have various other compositions that aren’t necessarily the same as the other.

As this spell is one of the very few transfiguration spells that can be used as a shield, it is primarily utilized in combat. Some of you may have heard about its use at the Ministry of Magic years ago when Voldemort was still at large. The late Albus Dumbledore used the spell to protect himself and Harry Potter. While it is rather specific, this spell does have practical uses! Now, please welcome Professor Penrose, who will be talking to you about those applications. 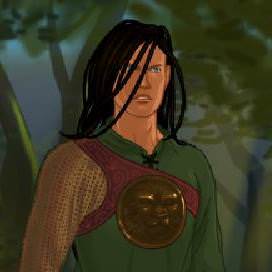 Good day, students. As many of you know, I am Professor Jericho Penrose. Most frequently you will see me in the Defense Against the Dark Arts classroom, but today I have joined you all at the request of Professor Mitchell in order to provide a practical look at transfiguration. I have been told that today you are looking at the Glass to Sand Shield. This spell, while relatively simple within the field, can be particularly useful. It actually reminds me of my days training at the Ministry for the Auror Department.

It was in my early days. We were paired up with other new recruits in the Auror Training Program and had to duel each other. These duels were non-lethal and only lasted two minutes. My opponent and I bowed to each other, and the battle began.

It was apparent that my opponent had an affinity for glass transfiguration, since he used those types of spells quite often. I needed to find a way to turn that to my advantage. As I attempted to dodge, I ended up crashing through a glass wall that he had conjured. I was cut and bruised, but my shock turned to fear as I saw the shards of glass flying towards me. I only had seconds to think, so I pointed my wand directly over me and performed the Glass to Sand transfiguration. It worked as a shield, and the resulting sand whizzed past either side of me but did not affect me in any way. I could feel the strain holding the spell for an extended time was putting on me, but I held it until I was sure all of the glass was taken care of.

After I lowered the transfigurative shield, the duel was called to an end, and I was declared the victor for my creative use of basic spells.

So, students, that is an example of the practical uses, not only of this spell, but I hope of transfiguration as a whole. As you study more, I hope that you pay close attention to Professor Mitchell and are thinking about what other uses spells might have, not just worrying about how well you have to do on the quizzes or tests in order to pass. And now, I will take my leave and place you back in the capable hands of Professor Mitchell. Professor, it has been a pleasure.

Thank you, Professor Penrose! It was an honor to have you in the Transfiguration classroom! Now, let us get down to the spell!

The Transformation
This spell is the final one you will learn this year! I know it must be hard to continue to keep your mind in class as you’re all ready for end of term, but I do expect your full attention! 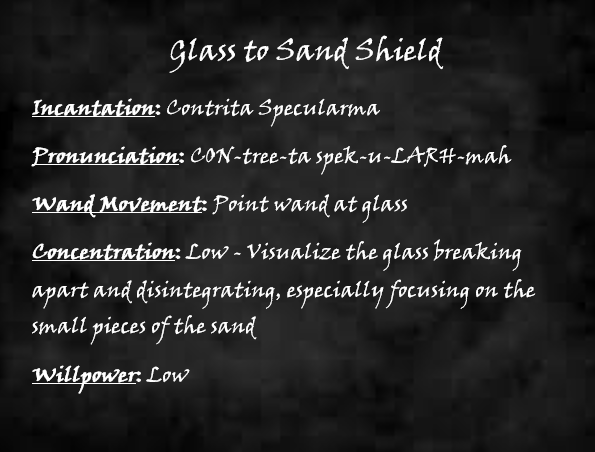 There aren’t many ways this spell can backfire, but the most dangerous is perhaps it not working at all. When glass is flying towards you, it can be extremely dangerous. For this reason, I would prefer this spell be practiced only in the Transfiguration classroom; that way I can keep an eye on you to make sure safety precautions are being taken. Please be careful, I would hate for anyone to have to take a trip to the hospital wing! The only other backfire known is for the spell to partially complete by breaking down the glass, but not into the fine particle size that is required for it to be defined as “sand.”

Historical Context
This spell was invented by Miss Miriam Portfender in 1884 as part of her research into spells that could easily be used for protection during natural disasters. In particular, she was looking into spells that could protect someone from falling debris, either by redirecting it away from the person or breaking it up into less harmful pieces. Spells such as the Reductor Curse could be used for this purpose, but require an increased amount of willpower to perform. Miriam was hoping to find a spell that could be used by any level of spellcaster. Within her research, she managed to come up with a spell that would reduce glass coming at the caster into a fine sand that would do little to no harm. Though it was not exactly what she was looking for, this spell still found its uses in defensive combat situations, as described above by Professor Penrose.

Review
So, as a small review before you all start your final examination, I will be giving you a brief recap of what we have covered in each lesson this year. This review in no way covers everything that you will need to know for the final, just the general topics. You are still responsible for all of the information in all of the lessons. If that is understood, let’s get started!

Lesson One was your basic introduction to transfiguration. We defined transfiguration as “the alteration of objects in our physical world” and described how it is one of the more scientific branches of magic. We also described the Transformation Formula and its variables, including the difficulty, wand power, concentration, viciousness, mass, and unknown variable, and concluded the lesson discussing the dangers that come with transfiguration.

Lesson Three was when we delved into the Five Principal Exceptions of Gamp’s Law. These exceptions, which include food, magical energy, love, knowledge, and life, are things that we are unable to conjure or create via magic. It is important to note that these are natural laws, rather than man-made laws, meaning they are governed by the natural power of the universe.

We covered transformation theory and the general process of transfigurative spellcasting in Lesson Four. We discussed the need for concentration and willpower and how they affect transfiguration.  Willpower is needed especially for live transformations and transfigurations dealing with larger objects. Concentration is used more when there are fewer similarities between your starting and ending objects and when the resulting object is more complex or detailed. Transfiguration also uses small, precise wand movements and incantations derived from Latin.  We ended the lesson discussing variations in transfigurative spells and the ability to cast on objects that are similar to, but not exactly the same as, the object the spell is intended for.

Lesson Five marked the halfway point of the year and your first transformation! This lesson covered the Matchstick to Needle transformation, while Lessons Six, Seven, and Eight covered the Smoke to Dagger, Fork to Quill, and Whistle to Watch Transformations, respectively. For all of your practical lessons, you should be familiar with the breakdown of each object and the spell itself, along with its history and usage.  In addition, you should be familiar with our two wonderful guest lectures of the year from Mr. Magnusson in Lesson Six and Professor Penrose today.

Conclusion
It has been a pleasure having you all in class this term, and I hope you have enjoyed your time in Transfiguration! I look forward to seeing you all again for Year Two.

An introduction to the science of transfiguration. This will cover what transfiguration is, its branches and laws, and basic inanimate transformations.
Enroll
Hogwarts is Here © 2022
HogwartsIsHere.com was made for fans, by fans, and is not endorsed or supported directly or indirectly with Warner Bros. Entertainment, JK Rowling, Wizarding World Digital, or any of the official Harry Potter trademark/right holders.
Powered by minervaa