Welcome
Professor Mitchell sat in class, sorting through various groups of forks. She hoped that the students would enjoy today’s lesson and grinned when she saw them start to file in, waving them all to the front of the class. “I want all your quills up here today. You won’t be using the ones that you’ve brought - rather, you’ll be creating new ones.” The professor handed each student a fork as they set their quill down. “Return to your seats now, please.”

Introduction
I hope that you will all find today’s transfiguration fun! I thought this would be an interesting one to do. Please sit down so that we can begin. This process is more difficult than the transformations we’ve covered so far this year, but I know that you are all more than capable of handling it. 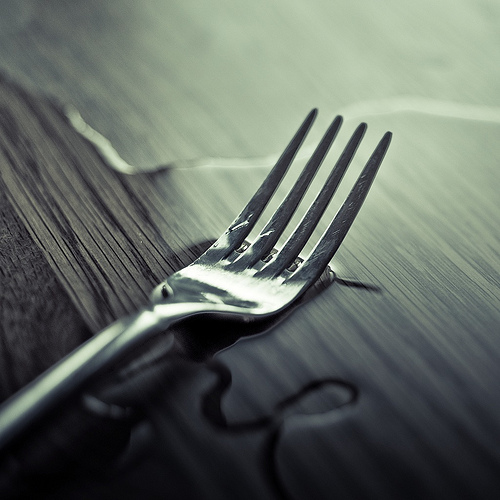 I trust that most of you know what a fork is! We use them on an almost daily basis in Western culture. Forks are just one of many pieces of cutlery used for eating, with the other main ones being spoons and knives. Forks aren’t used much outside of Western culture, where other utensils, such as chopsticks, are more popular. They are used to move food from a plate to one’s mouth, either by using the tines (or the points) to stab the object, or using the rounded part to scoop up food.

There are many different types of forks that have a variety of uses. Some are more popular in certain parts of the word than in others. These many types of forks are seen more often in fine dining, due to the many courses that are eaten during these meals. Some of the forks that are used are salad forks, dessert forks, dinner forks, and oyster forks.

The fork you have in front of you is a dinner fork, since it is the most commonly used fork and the easiest to find around. Keep in mind that this spell will work with any fork, however.

Let’s get into the observations!

Sight
The fork is silver in color with a metallic sheen. It has a smooth appearance. There are four tines coming from the rounded base, which tapers into a handle. There are no patterns or designs.

Sound
When dropped on the table, the fork makes a very sharp and metallic clatter.

Taste
The fork has a faint metallic taste to it, but for the most part is tasteless.

Smell
There is no odor associated with the fork.

Touch
The fork is very cold to the touch. It is smooth and has absolutely no bumps or hard edges. The tip of each tine is slightly sharp. 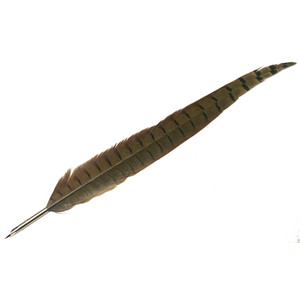 Many of you are familiar with the writing utensil most common to the wizarding world, the quill.  Made from a molted flight feather, preferably a primary wing-feather, quills come in all shapes, sizes, and colors, but are all used for the same purpose, which is writing. The most common type, and the type we will be aiming for today, is the pheasant quill, as it is the easiest to transfigure. Other less common types include eagle, peacock, Fwooper, and even phoenix quills. It is possible to perform this spell and achieve these other types, but it is significantly more difficult due to their increased size and range of color.

Now, I’m sure many of you have also heard of magical quills, such as those of the self-writing, self-inking, or spell-checking varieties. This spell will unfortunately not give you a quill of this kind no matter how hard you try, as magical energy is one of the Principal Exceptions to Gamp’s Law. A mundane quill must first be transfigured, then charmed, if you wish to obtain one of the aforementioned objects via transfiguration. Sadly, the spell we are learning today is also unable to give you one of those sugar quills that I see a couple of you occasionally nibbling on during class.

This brings us to our observations of the quill.

Sight
The pheasant quill is a light brown or off-white color with stripes. It has a stiff spine down the center, with bristles, or barbs, coming out of the sides. The bottom of the quill is free of barbs and comes to a sharp point.

Sound
The quill makes no sound other than a slight scratching while writing.

Taste
If you were to taste the quill, it would taste a bit like hair.

Smell
The quill doesn’t have a strong smell, but it does have a very slight earthy aroma.

Touch
The barbs feel slightly coarse, with the ones closer to the tip being softer. The spine is smooth and the tip slightly pointed.

The Transformation
I hope you all feel adequately prepared to begin this transformation! All the notes are up on the board, as I am aware you don’t have your own quills, and will be there for you to take down after you complete the transformation. As always, please let me know if you get your fork stuck in a half transfigured state. I will gladly come help you with it.

This transformation is a little trickier than the ones we’ve done so far as there aren’t a large number of similarities between the fork and the quill. It just means that it will take more concentration on your part. Please do not be discouraged if you do not get it right away. Practice and patience will get you far within the science of transfiguration. 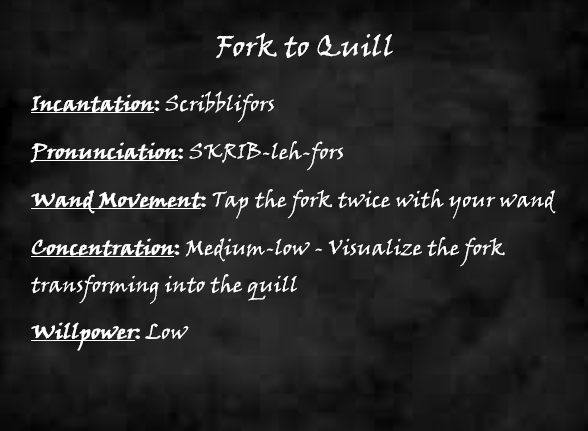 The complications with this spell are rather simple. There is, as always, the possibility of nothing happening. You can turn the fork the color of a pheasant's feather without actually creating barbs or the nib or you can create a silver quill that doesn’t take on the correct colorings.

Historical Context
The origin of this spell is actually a rather interesting story centered around an, ah, shall I say, aggressive writer by the name of Arthur Scatterfield, who had a terrible habit of breaking the tip of his quill every time he wrote. Frustrated at the need to buy so many quills, Arthur decided to grab the closest thing to him to try to transfigure into a quill. The closest thing happened to be a wooden fork that he had carved himself (whittling helped him relieve some of his anger in a constructive manner). It was the perfect solution. Every time his quill tip would break, Arthur would simply untransfigure it, then whittle down the tip of the broken tine and transfigure it again.

Today this spell is mainly used for the sake of convenience. Forks are plentiful most anywhere you go and can generally be found cheaper than quills. It’s the perfect transfiguration to have up your sleeve if you happen to get an idea for an award-winning novel in a coffee shop and have nothing but a napkin and a fork at your disposal.

Conclusion
I hope you all enjoyed the lesson today! Please practice this transformation outside of class, but do so in pairs - that way you have someone there to help should anything go wrong. I hope you have a wonderful day. Class dismissed!