11/25/22 - PA Applications will open January 1. Applicants should have completed all Year One assignments, including essays, and have at least an 85% in the course.

Welcome
Professor Mitchell sat at the front of the classroom, twiddling her thumbs as she waited for the class to file in. The previous week’s assignments sat graded on the desk in a nice, neat stack. As she heard the door creak open, the professor stood and ushered the students into the classroom “Quickly, quickly, find your seats, we’ve got a lot to go over today!”

Introduction
Today we will be covering a fun little transfiguration, but before we get into the spell, I would like to give a few reminders. I hope you all have been practicing the spells we have learned up to this point, as next week will be your final exams. They will consist of a test and a few optional essay prompts, so be sure to study! We will have a short review next week, but I would still advise looking over your notes before coming to class. 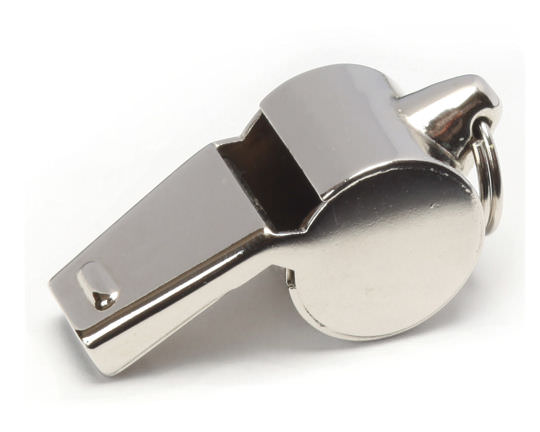 Whistle
A whistle is probably the simplest of all the musical instruments. It is used to make one pure tone via a stream of air, usually produced by one’s mouth. While there are many different types of whistles, the ones that you will find on your desks today are called pea whistles. They are made of metal and consist of a neck, where the air enters, a rounded body, and a little ball, or “pea,” inside the body. The pea is used for the purpose of making the whistle louder. Other types of whistles include dog whistles, party whistles, and slide whistles. The spell we are learning today will work on any type of whistle, but is easiest to perform on the pea whistle for reasons we will discuss in a minute.

Now, as always, on to our sensory descriptions.

Sight
The whistle is silver and shiny. It has a round, cylindrical body with a rectangular neck.

Sound
When blown into, the whistle makes a loud, high-pitched tone. When dropped, it clatters, and when shaken, it rattles.

Taste
The whistle has a metallic taste to it.

Smell
There is no smell associated with the whistle.

Touch
The whistle is cold to the touch and smooth. The edges are rounded, so no part of it feels sharp.

Fun fact: whistles were first carved out of gourds. 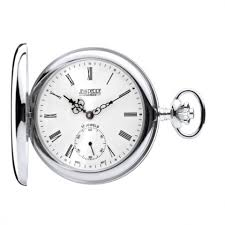 Having come about in the 15th century, watches are a convenient way for both wizards and Muggles alike to tell the time. Once again, there are many different types of watches, including wristwatches, pocket watches, and digital watches that our Muggle-born students may know more about. In today’s transformation we will be aiming for pocket watches. These are small, usually round, and made of metal. They typically have a lid and a clasp to keep them closed. Inside the lid will be the watch face with the an hour hand and a longer minute hand, along with 12 markers around the edge of the face. As with the whistle, it is important to keep in mind the parts of the watch that we can’t see, such as the cogs and gears on the inside that are necessary for it to run properly.

Sight
The pocket watch is round and a dull silver color.  When open, there is the face of a clock on a white background. The glass over the face of the watch is slightly reflective.

Sound
When dropped, the watch makes a clunking sound. It clicks when the lid is opened and you can always hear the dull “tick-tock” of the gears and hands moving.

Taste
The watch has a metallic taste.

Touch
The watch is cold and smooth to the touch.  It feels slightly bumpy at the hinge and the clasp.

The Transformation
So, now that we’ve all got a solid understanding of our two targets for this transformation, let us get on to the spell! The first thing to note is that this spell will require a bit more concentration than the other spells we have learned in this class. This is due to the more complex nature of the two objects we are dealing with and the aspects of them that are not visible to the naked eye. You must remember that the whistle contains a little ball inside its body and that this needs to form into the gears that allow the watch to move behind the clock face. This is an excellent warm up to prepare you for the transfigurations that you will learn next year, which deal with live transformations. Creatures are much more complex than any of the mundane objects that we have dealt with so far and as such, much more care and focus must go into dealing with them.

Another important factor to keep in mind when performing this transformation that we have yet to really encounter is the sense of sound. Both of these objects produce distinct noises that must be taken into account unless you want to end up with a watch that constantly whistles at you.

With that, I believe you are all ready for the incantation and wand movement: 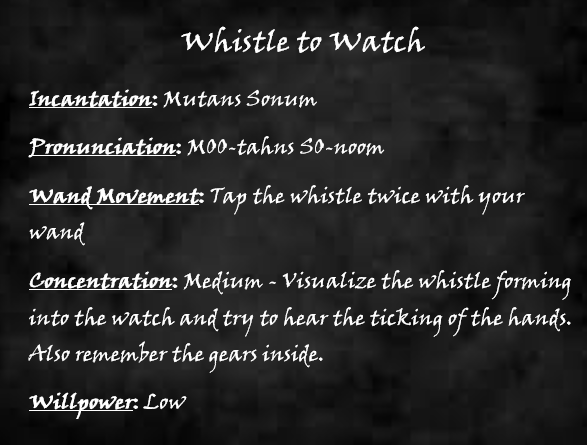 With more concentration, you could produce a pocket watch with a more intricate design on the lid or clock face, but for practicing purposes, I would like you all to aim for a plain one like the one I passed around.

Possible backfires or failures of this spell include producing a watch that constantly emits a high pitched screech, a pocket watch that doesn’t open, or a watch that doesn’t work or is set to the incorrect time. I don’t expect many of you to succeed in transfiguring a functioning watch the first time around and that’s okay. However, I do want you to make an attempt at transfiguring the watch to read the current time. This will require a little extra concentration, but I believe you are all capable.

Historical Context
Now, if any of you here have experience playing in an orchestra, you may better understand the reason behind the creation of this spell. It is actually a relatively recent spell in comparison to the others we have learned in class as it was created just a little over 100 years ago in 1907. It was invented by wizard Johannes Miffington, a Welsh piccoloist in the London Symphony Orchestra. During one particularly long piece (that unfortunately lacked much action for the piccolo section) Johannes gave up on counting the many beats of rest and decided to time the wait instead to know when he would have to play again. As he couldn’t see the clock due to the bright stage lights and didn’t have a watch on him, he decided to transfigure the one thing he did have into a pocket watch: his piccolo. Now, unless you are familiar with musical instruments, you may be a little confused right now. A piccolo is a tiny flute that produces noise in the same way as the whistles that you have in front of you today and therefore falls under the category of “whistle” for the sake of this spell.

There are not very many practical reasons to use this spell today other than for the sake of learning, as I have described above. It is for this reason that it was simplified from its original version of using a piccolo, a rather complex instrument, to the much easier pea whistle.

Conclusion
And with that, I hope you all have enjoyed today’s rather noisy lesson. Feel free to take your pocket watches with you, it might help a couple of you get to class on time next week. Be sure to also take a homework assignment with you on your way out and submit it before next week’s lesson. Class dismissed!

An introduction to the science of transfiguration. This will cover what transfiguration is, its branches and laws, and basic inanimate transformations.
Enroll
Hogwarts is Here © 2022
HogwartsIsHere.com was made for fans, by fans, and is not endorsed or supported directly or indirectly with Warner Bros. Entertainment, JK Rowling, Wizarding World Digital, or any of the official Harry Potter trademark/right holders.
Powered by minervaa