Lesson 9) Blast-Ended Skrewts and the Final

As the saying goes, all good things must come to an end. We have reached the end of our first year together and today you will be sitting through your final examination for this course. As a treat, we will be briefly covering a creature that you will most likely never encounter, due to it being extinct. The creature I am referring to is the Blast-Ended Skrewt.

Blast-Ended Skrewts - An Overview
The Blast-Ended Skrewt is the offspring of a fire crab and a manticore, two creatures that were experimentally bred by Rubeus Hagrid, the Keeper of Keys and Grounds here at Hogwarts. This obviously broke the Ban on Experimental Breeding, which was enacted in 1965 - a law which states that it is illegal to breed new species of creatures without express permission from the Ministry of Magic - but Hagrid never faced any charges for the creation of a new species. There is speculation that Hagrid got special permission to breed Blast-Ended Skrewts specifically for the Triwizard Tournament, a claim that has never been confirmed.

Due to the way they are bred, Blast-Ended Skrewts are creatures with an interesting appearance. They look very much like a cross between a crab and a scorpion. On both sides, they have a tail-like limb that arches out away from their body before curving around so that the stinger on the tip of the tail hangs over the body, ready to strike out against any who comes near. One side will be slightly shorter than the other, but the way these two limbs function, and where they hang, gives the torso and “arms” of a Blast-Ended Skrewt the appearance of a crab.

Blast-Ended Skrewts have pale skin and no eyes, but do not let this fool you; they will be able to hone in on you very easily. They have poor vision and mostly see through their hearing - if they can hear you, they can find you. Their leg structure gives them more agility. They can change directions in an instant and can pick up speed again in the same amount of time. Below is an image of the creature as taken from the memory of Harry Potter when he encountered one in the third task of the Triwizard Tournament. 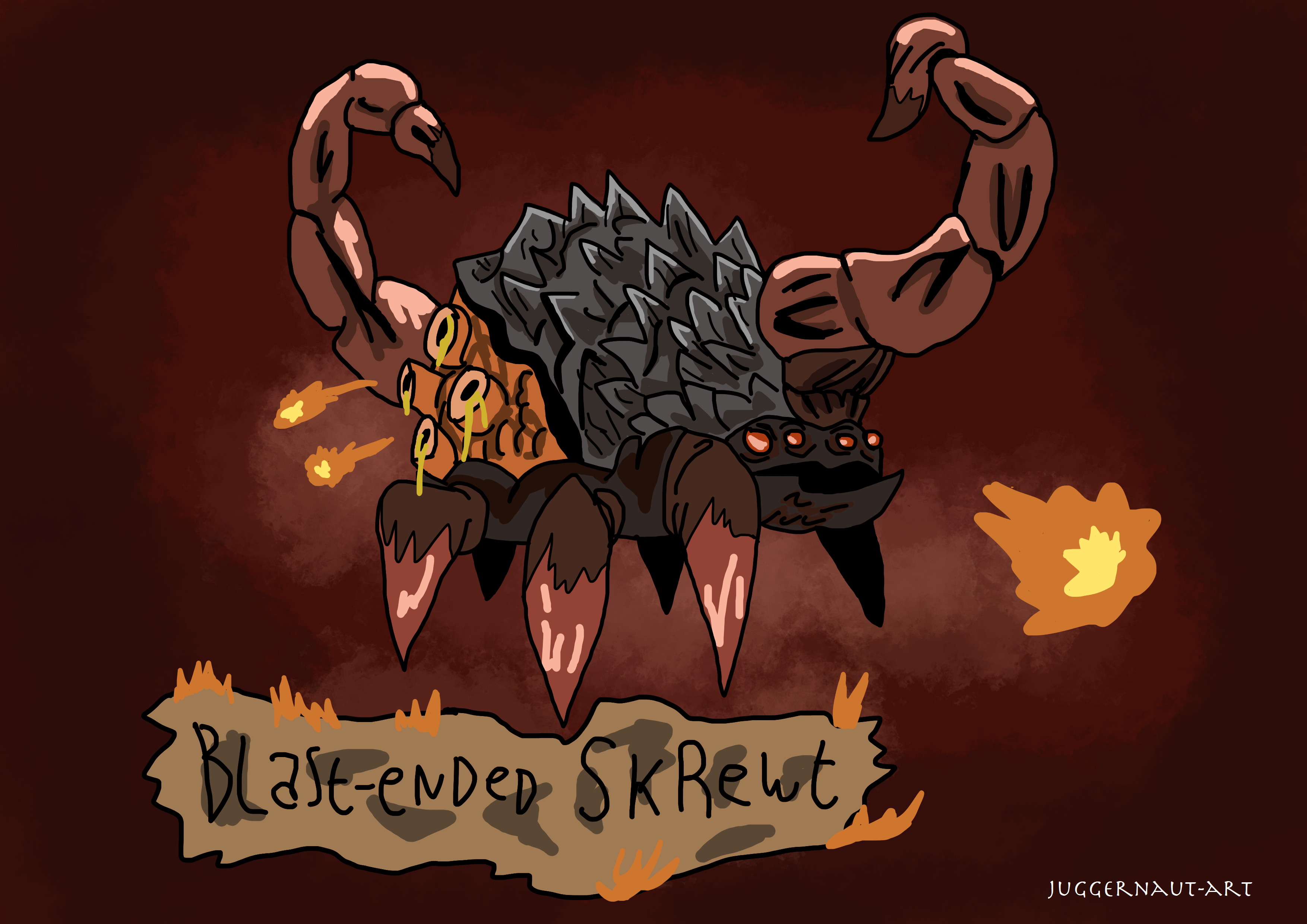 We have already begun to cover the basic anatomy of a Blast-Ended Skrewt, but there are several other key components that must be discussed. The first of these is their skin. Similar to a crab or turtle, the Blast-Ended Skrewt primarily resides within a protective shell that rests on the top of its body. This shell is its primary method of defense - it will rarely attack in a way that leaves other parts of its body exposed.

Its skin is also covered with an extremely thin layer of tough plates that protect the skin in addition to its shell. These plates are part of what gives these creatures their pale hue - the exposure to the elements over an extended period of time without proper care for their plates can dull the color and give it the pale appearance. During the 1994-1995 school year at Hogwarts, Hagrid attempted to have his Care of Magical Creatures class learn the proper care for a Blast-Ended Skrewt, including keeping their plates clean; this did not work because of the aggressive nature of the creature; they would automatically attack any students who got too close.

How Do They Attack?
As we have already seen, the Blast-Ended Skrewt has several weapons at its disposal. The fact that its body serves as a natural defense against most forms of attack would be enough, but it has three additional forms of attack that it can utilize, some of which it can and will utilize at the same time.

The first of these is its bite. Its mouth is about half a foot or more wide, which is fairly large for the average mouth; however, it is regular sized for a creature that averages about ten feet long. Their bite is venomous, so any attempt to handle a Blast-Ended Skrewt will need to be accompanied with the standard protections: wearing dragonhide gloves, not wearing loose clothing, and having an Antidote to Uncommon Poisons on hand on the off chance you get bitten. You also want to be aware of the symptoms of an allergic reaction to a bite that we discussed earlier this year and take the appropriate precautions and actions if you notice you are having an allergic reaction.

If you can avoid the bite of a Blast-Ended Skrewt, you then have to then be aware of its stinger. It is important to note that only male Blast-Ended Skrewts will have stingers. The females will have suckers on their body instead, which they will use to latch onto the body of their target and suck their blood. The stinger of a Blast-Ended Skrewt can move fast, darting out and stabbing you before you have fully had a chance to comprehend that the stinger is moving. Each sting from the stinger will inject a small amount of poison into your system, which can also be countered by the Antidote to Uncommon Poisons.

The final weapon that a Blast-Ended Skrewt has at its disposal is its fiery rear-end. You all should be familiar with this, since this is the exact same way that a fire crab attacks. The only difference is that Blast-Ended Skrewts are larger, so the fireballs that it can shoot will be bigger than those of a fire crab. Unfortunately, the aggressive nature of the Blast-Ended Skrewt means that it will not stop attacking just because you get far enough away, so the Knockback Jinx will not be useful to you here.

The Chink in the Armor
By now you must be wondering how these creatures, which seem to be bred with the intent of never being beaten, can be overcome. Their attacks are always coordinated with their body so that there is never a presented moment of weakness. The answer to the question is that you must find the chink in the armor.

In most cases, this simply refers to finding the weakness of the creature with the hopes of exploiting that weakness; however, in the case of the Blast-Ended Skrewt, it literally means finding the chink, or opening, in their armor. This chink happens to be on their stomach. Despite the overall armor and plates and shell that keep a Blast-Ended Skrewt protected, the underside of their body, where their stomach is, is soft and can be attacked to cause harm to the creature. You will only ever get a second or two where the belly is exposed, so you must have a spell in mind when you make your move and be ready to cast it in an instant.

Some ways that you might be able to get the creature’s stomach exposed are to slide under the creature, which can be dangerous if it realizes what you are doing because it can simply lay on you, or you can dive and hit the ground, giving you a second to get a spell off before it moves to protect its stomach. What other ways might you be able to expose its weakness?

Ingenuity
As I mentioned at the end of the previous lesson, the Blast-Ended Skrewt will not appear on your final exam this year; however, I do want you to think about what you have learned today. You may never encounter a Blast-Ended Skrewt, but you may encounter creatures that share similar characteristics with it. If you pay attention now, you may be able to think quicker if you find yourself in a dangerous situation because you will know what to expect.

As always, I simply provide information and the best possible practices when approaching the creatures I teach you about. Many of them will not have a singular best way to defeat them, but will have several ways, only one of which I provide you - the most common form of defense. When you are in the field, you will have to rely on your own knowledge, and employ a fair amount of ingenuity, in order to survive. Use your instincts and get creative...once you have learned more spells and gotten more experience casting quickly. At this point in your magical career, I expect you all to follow the methods I give you. Later on, there may be options to get creative.

And that brings us to the end of the term. I certainly hope you all have enjoyed it and feel more confident as you prepare to take your final exam and return to the world beyond these castle walls. Remember, due to the Decree for the Reasonable Restriction of Underage Sorcery, you are not permitted to use magic outside of school UNLESS it can be proven to be a life threatening situation where the use of magic is the only way to save you life or the life of someone else.

Your final exams await you. I wish you all the best of luck and, so I say for the last time this year…