Welcome students! Today is the last time we will learn about creatures this year. I hope you have enjoyed all of the species we have studied this year, and that this one rounds out the year nicely. This final creature is one I hold near and dear to my heart. I own one, which was gifted to me by my parents. I love her with all my heart, and she has been in my life since I was in my Fifth Year at Hogwarts. Students, today we will be covering the Fwooper!

Fwoopers: The Bird That Needs to Be Silenced

Fwoopers are an exotic African bird coming in four different varieties, or colors: orange, lime green, pink, and yellow. Fwoopers are known for their strange call, which drives any listener insane. A monthly Silencing Charm must be put on them to prevent an owner from being driven to insanity. 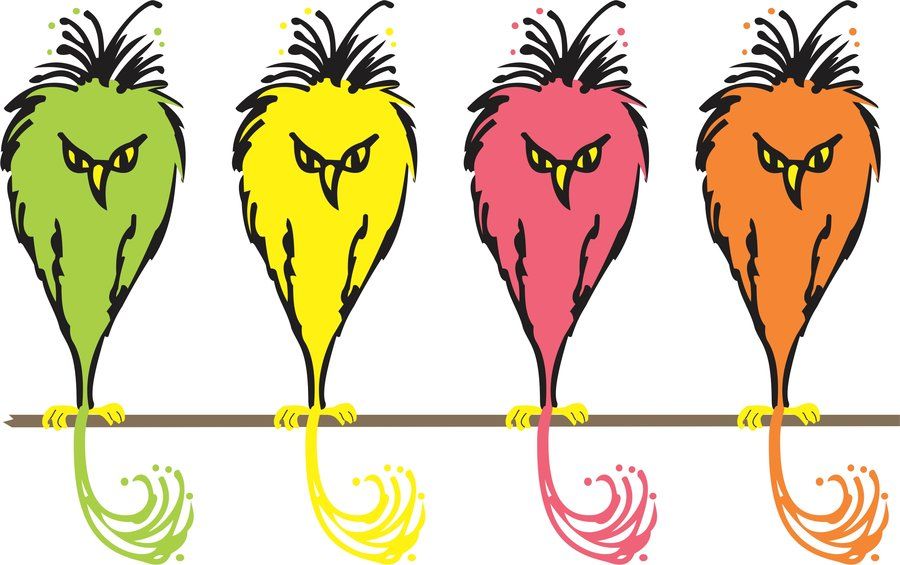 Fwoopers grow to between twelve to fifteen inches tall. Their plume is usually two inches tall, with the tail being between two to three inches. Their feet and shanks are bright orange in color, with each foot having three toes, and a hackle, which sits on the ankle.

Fwoopers eat seeds, so buying Muggle birdseed from stores will work just fine to feed them. It has been found they like finch or parakeet feed the most. They have trouble eating larger seeds, like parrot mixes, which contain peanuts or large cereal pieces. However, if you are looking for something more specific, Fwooper seed, made to improve the brightness of their plumage, is sold in creatures stores throughout the wizarding world.

Baby Fwoopers, called Fwicks, are dark grey to black in color. They don’t have their bright plumage yet, as they just have their baby down. When they are about 28-30 days old, and their bright plumage starts growing in, they are called squeakers. When a Fwooper is a squeaker, they start to sing. Until they are an adult bird, which is between four and six months of age, you will need to redo a Silencing Charm once a week. The sign a squeaker has become an adult is when they begin to partake in reproductive activities. For females, this is laying eggs. For males, this is growing a sex feather, which is a feather on their tail that is longer than the others. The sex feather typically appears overnight and can be several shades darker or lighter than the rest of their plumage.

The application asks you what your intent in owning Fwoopers is. Most people own them to sell the feathers -- which are used for quills -- and the eggs, which have pretty, decorative patterns and are used as household ornaments. If your application is accepted, you then go in for an interview. In the interview, they discuss again why you want to own Fwoopers, how you will care for the Fwoopers, and you must prove your proficiency in casting a Silencing Charm. If you need a refresher course on casting a Silencing Charm, you can request a pamphlet when you request an application.

After your interview, the Head of the Department for the Regulation and Control of Magical Creatures will send you a letter. If you are granted a license, you will receive it within thirty days from the date on the letter. If you are rejected, you can appeal and find out why you were rejected and try again, given the circumstances, sixty days from the date on the letter.

As you might know already, the incantation for the Silencing Charm is Silencio, which is Latin for “silence”. You should be learning this fairly soon in your Charms class. Beware, if you perform the charm incorrectly, the Fwooper can swell in size, and become louder. Performing a Silencing Charm correctly will result in the Fwooper becoming mute, protecting you from the insanity their call causes. However, one individual felt the call was beneficial: Uric the Oddball. While you may have discussed him in History of Magic for a variety of reasons, I mention him today to discuss what is now referred to as “pulling an Oddball” in the DRCMC. Convinced the Fwooper song was beneficial to his health, Oddball listened to it nonstop for three months. On his hearing date with the Wizards’ Council, to show them his findings, he showed up wearing nothing but a hat. The hat turned out to be a dead badger.

Now, there are two reasons people keep Fwoopers as pets: the colorful feathers and the patterned eggs.

Fwooper feathers are used to make fancy quills, because of their vibrant colors. Fortunately, Fwoopers are very cooperative during the plucking process. However, because of the size of the bird, you can only take between two and four feathers per bird every three months. This is because their size determines how quickly they can regrow their feathers. Most breeders sell the feathers to quill manufacturers. These establishments will take them if the feathers are in good condition. Good condition qualifies as: a) there are no missing feathers/parts of the feather; b) the shaft, or spine, is not broken; and c) the color is rich and vibrant. C usually is not a problem, because Fwoopers typically have vibrant feathers throughout their life, no matter their diet or age. However, as discussed earlier, special Fwooper seeds are shown to make them even more vibrant. It has also been found that feeding fruits and vegetables can alter the shade of the feather. For example, feeding a lime green Fwooper spinach would cause darker green tinting to appear in the feathers. Doing this has allowed Fwooper feathers to develop new complexities, and widen the feather market.

This practice has also been used to change the colors completely. As we previously discussed, yellow is not dominant over any other color. Breeders use this to their advantage. They will breed yellow to yellow, ending up with offspring that are true yellow in color. They then use fruits and vegetables to completely change the color of the feather the Fwooper produces. For example, by feeding a Fwooper only blueberries, the feathers will begin to take on a blue hue. This will eventually lead to the blue becoming stronger and stronger, and the feathers will turn blue entirely. Yellow is the best variety to attempt color change to as it is the lightest of the four varieties, and every other color, even those caused by diet, is dominant over yellow.

Fwooper eggs are beautifully patterned and are typically used for decoration. Female Fwoopers lay one egg a week, which is about the size of a softball. Surprisingly, the Fwooper is able to pass this rather large egg through their small frame due to their pelvic bone’s ability to expand greatly. Female Fwoopers will typically give up their eggs unless it is a green patterned egg. Green patterned eggs are fertile and shops will not take them from Fwooper breeders. It takes 21-28 days for a Fwooper egg to hatch if it is being sat on by the female. If you are incubating the egg artificially, in an incubator, the temperature will need to stay between 101 to 103 degrees Fahrenheit.

There are many different patterns that can come from Fwoopers. Below is a chart, to help you better understand which Fwooper produces what! Now, the colors listed can be any shade of that color, from the palest of blue to the darkest of orange. This chart reflects the original color of the Fwooper, as changing their color with diet does not change the egg color.

Each color of Fwooper also produces a different pattern on their eggs. I have provided another chart for you below.

Fwooper eggs are considered delicacies in several European wizarding countries, but mostly Romania. It is common to eat blue, red, and yellow eggs, as they are the most common. They are commonly soft boiled, though they are also cooked over easy and served on toast, potatoes, or with meat. It is a very polite gesture in Romania to give the host of a party or event a Fwooper egg, to show your thanks for an invitation to the event. When gifting a Fwooper egg, it is recommended to choose a “fancier” egg, and not the common blue, red, and yellow eggs.  This shows your respect and appreciation for being invited to an event. If you were to bring a common egg, this would imply you are not grateful for being invited or felt you were entitled to an invitation.

There is now a ten question quiz! I hope everyone enjoyed this lesson, as I have been waiting anxiously to teach it! As you all know, your final is next week. I recommend reviewing the lessons, and deciding which creatures you like best, as well as which have the most importance to the wizarding world. This might help you with your final exam. Though this was the last creature of the year, there will be plenty more creatures to discuss in the coming years!