Welcome everyone! You are now halfway through your first year of Care of Magical Creatures. Up to date, we have learned about the Ministry of Magic, Flobberworms and Horklumps, Bowtruckles, and fairies.  Do remember, you have a midterm today, which will consist of twenty-five multiple choice questions along with a short essay will be available. You might want to review the past four lessons, using your notes or going back through the previous lectures.

Gnomes: The Uprooters of Gardens 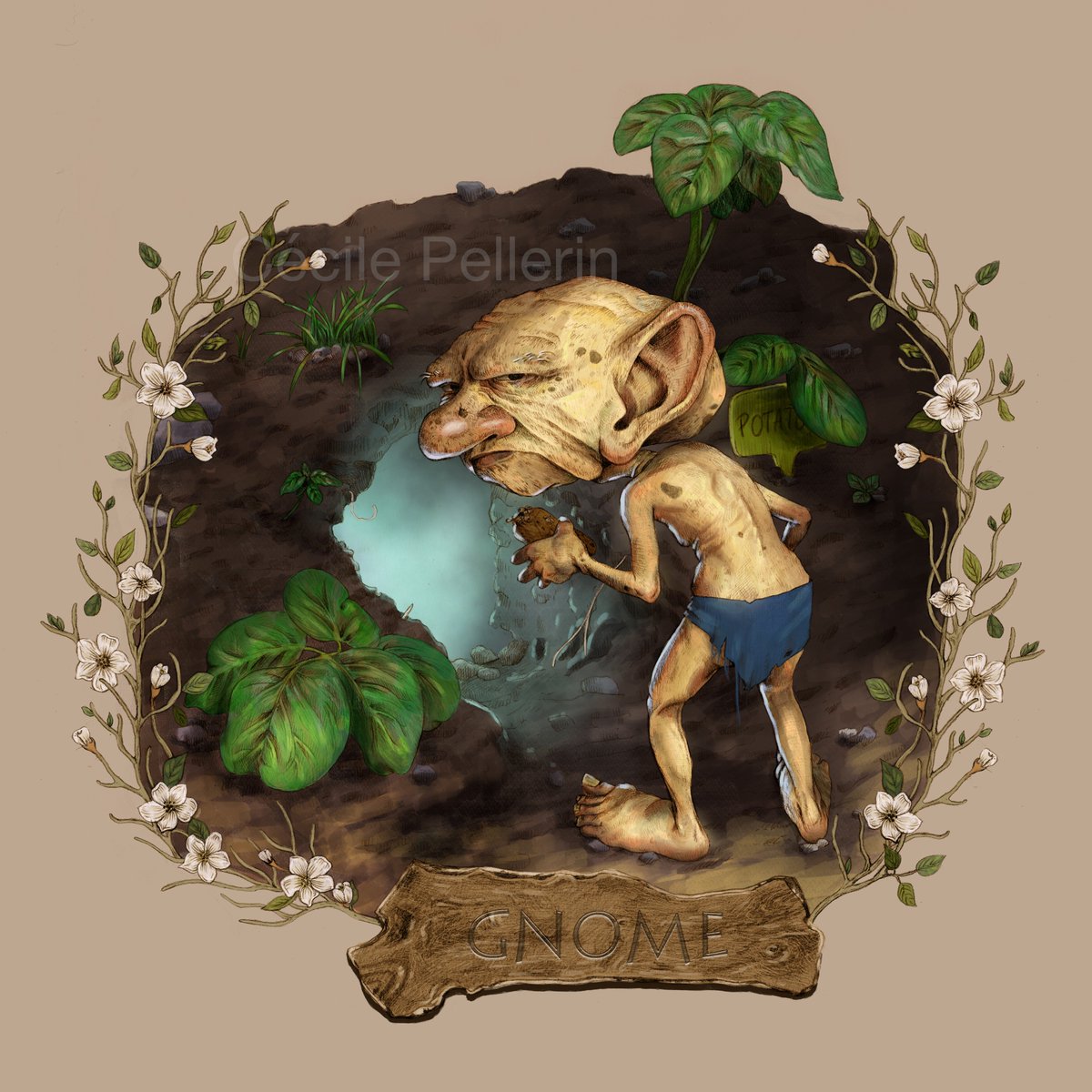 Today, we will be studying gnomes, or Gernumbli gardensi as they are called by those that believe in their magical properties. They are considered pests in the wizarding world, due to their invasion of wizarding yards. It’s easy to spot a gnome in your garden by looking for a brown, potato-looking creature that is no more than one foot tall. Gnomes are found throughout Europe and North America and live to be seven to ten years old. They are herbivores and feed on any sort of plants in the garden. Gnomes even eat the roots and they can rip up your garden rather quickly. They aren’t very intelligent, so they will often eat poisonous plants and make themselves sick. On occasion, they will also eat worms.

Gnomes also feed on Horklumps, as we previously covered during Lesson Two, so the two creatures typically come hand in hand. It is rather easy to remove a gnome infestation, due to their low intelligence. Once you start the removal process, all of the gnomes flock to the surface, eager to see what is happening. Apparently, the sound of other gnomes screaming is entertaining to them, or they are simply confused as to what is happening. Eventually, they will file out of your garden, not wanting to be flung out like their fellow gnomes. By leaving on their own, they prevent themselves from getting lost and being forced to join a new colony.

Gnomes live in interconnected underground tunnels similar to ant colonies. The tunnels have been confirmed to continue down one to two miles. The tunnels, widthwise, will go to the end of the yard, sometimes even going past if the house is near a forest or other highly vegetated area. This is because it provides them with plenty of food. Gnomes live as a big colony and will sleep where they please in the tunnels at night. Individual gnomes do not own specific rooms, but they each travel and sleep wherever they please as the rooms and sections belong to the whole colony. Each room has a certain purpose: there are breeding rooms, food storage rooms, sitting rooms, and sleeping rooms.

While most of the rooms are pretty self-explanatory, we do need to go into detail about a few of them. Sitting rooms are rooms for the gnomes to entertain themselves and talk to other gnomes. Often, they try to catch ants for fun or sit in silence. Sleeping rooms are for rest, and as many gnomes as they can fit will sleep in each room. While gnomes can sleep in any room of those designated rooms, they tend to stick with the same room for an extended period of time. If the room becomes overcrowded, it is common for the gnomes that have been there the longest to move to a new room. While this seems odd, it is usually for the gnomes to have a change in scenery, though there must not be much to see in the tunnels!

Gnome breeding is like that of other mammals. While no gnome has a set mate, they tend to rotate through the same two or three gnomes. Gnome gestation is 59-62 days or about two months. They will have one baby, called a pup, who will stay with the colony for the duration of their life. Gnomes typically start breeding at six months of age and can have six pups per year. However, most take a break between breedings to care for the current pup, so the number of pups is usually reduced to three or four.

Let’s move on to one of my favorite topics of the lesson: gnome removal! To remove a gnome, simply grab it at its head and swing it around in a circle. When you feel you have swung it enough, let it go. The amount of time is a personal preference. I have found I really only need to swing the gnome around two or three times for it to be sufficiently dizzy. It will go flying from the yard and be too disoriented to find its way back. It will make some noise when you first pull it out, which will make the other gnomes come to the surface. After five or six gnomes, the rest should start filing out. You might have to do this several times, as the gnomes might come back to your garden because of their low intelligence. They don't remember that they were thrown from the garden before, especially if they are young gnomes, or are a newly forming colony. Be careful when removing gnomes as they can bite! While they are not venomous, the bite can be rather painful, and stay sore for several days. It is best to use a healing paste on the bites. While the area will not turn any strange colors, be careful of infection, as they can make rather deep bites with their teeth. Make sure to wash the wound thoroughly to prevent infection!

There is a faster way to remove gnomes from your garden. You can release a Jarvey in your yard, which will immediately dig into the tunnels and eat the first gnomes it finds. After these first few gnomes are consumed, the remaining gnomes will make a speedy exit from the garden, trying to save themselves. Several creature stores throughout London have Jarveys for rent for this purpose. Do be careful when removing the Jarvey, as it might attempt to follow the gnomes, and then you are out a rental deposit!

After they leave, gnomes will do one of two things: move to a new yard with an abandoned tunnel system or move to a new yard and create new tunnels. Both are fairly common; it just depends on which yard they come to first. It takes gnomes between two and three months to build a basic set of tunnels, about one mile deep, though the gnomes constantly add new rooms to their tunnels as their population increases. They will live in any yard they come across, no matter if wizards or Muggles live there, though they prefer wizarding gardens because they like the taste of magical plants more than mundane plants.

There have been questions raised as to whether or not gnomes have magic. Most people believe they don’t. However, there are some people, like Xenophilius Lovegood, the editor of The Quibbler, who believe they contain some small bit of magic. Lovegood believes gnome saliva has beneficial properties which make one’s creativity levels skyrocket. This has never been proven, nor is it seen as accurate in the wizarding world. However, if you are bitten by a gnome, take note if you develop any extraordinary ideas, as this could be evidence to prove Lovegood correct.

My, I cannot believe it is already time for your midterm! Take your time, study beforehand, and take the test when you’re ready. It is not timed, that way you won’t rush through it and earn a good grade. Good luck, everyone! Don’t forget, you will have a short answer too, like every odd numbered lesson. You will also have a short, ten question quiz. Next week, we will discuss the first demon of your Care of Magical Creatures education. Do not be alarmed, as they are still rated XX, but they do have some violent tendencies. I will see you all next week!