Good day, everyone! I hope everyone is happy with how they did on the midterm. I was very impressed with how well you all did. You give me hope that another great generation of magizoologists is rising up! Today, it is back to the grind: a new lesson and a new creature. It will also be your first look at Dark creatures. Now, please don’t be alarmed. These creatures were not used by the He Who Must Not Be Named during his reigns of terror. There is only one reason they are considered Dark creatures, but we will get to that later on in the lesson. 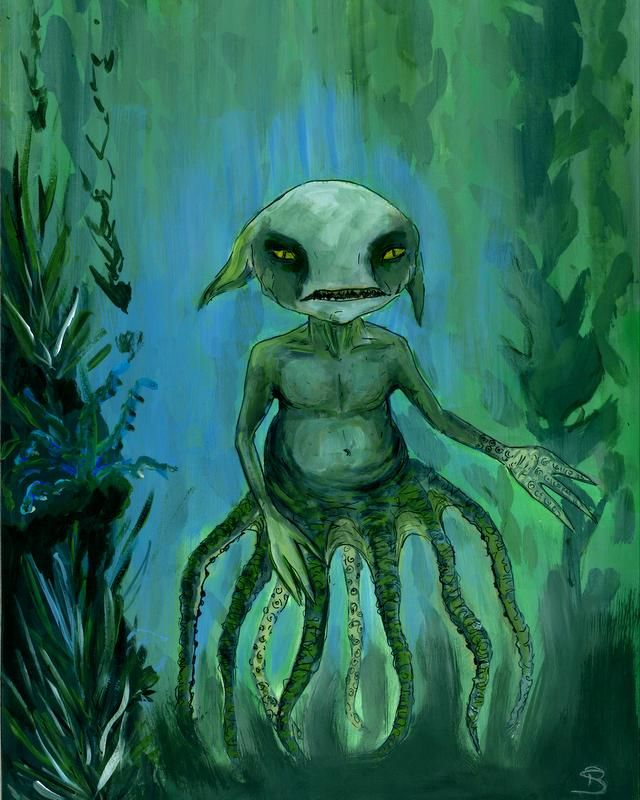 Today, we will learn about Grindylows! Grindylows are small, pale green water demons that have horns on the back of their heads and typically stand between three and five feet tall. In the images you see today, note that this green can range anywhere from olive to almost a kelly green. They are classified as XX by the Ministry and are found in many lakes, like the Black Lake on the Hogwarts’ grounds, in Great Britain and Ireland. Grindylows are considered Dark creatures because they are known to eat humans, however, this hasn’t occurred in a very long time, so there is no need to be alarmed. Eating humans is simply a last resort; they would much rather eat fish!

As mentioned above, Grindylows feed on fish, but will also supplement with algae. The kind of fish varies depending on where they are living and what is available to them. It has been found that if they are in a stressful environment, they will feed on fish more than algae, even turning their nose up to algae, because they are more carnivorous by nature. Magizoologists know that Grindylows live in freshwater more frequently than saltwater, so it is assumed they eat common freshwater fish the most, like catfish, largemouth bass, tilapia, and carps. In the Black Lake, they feed on various fish that are provided by the Hogwarts groundskeeper. Grindylows have been found to hunt in groups for fish, meaning it is likely they will tackle larger fish together and share the meat. For example, two or three Grindylows may work together to catch a large catfish.

While Grindylows typically have a negative response toward humans, you can keep them for short periods of time to study if needed. A fairly large tank, depending on the size of the Grindylow, is needed. In the tank, there needs to be plenty of foliage, so the Grindylow can hide from you. You will need to provide it with lots of fish, as this will keep them neutral towards you. You might have to try different kinds of fish, to see which kind your Grindylow reacts best to. It is important to keep the Grindylow neutral with you to lower your chances of being attacked. Though a Grindylow attack has not been reported in several decades, you must still be cautious of the possibility. 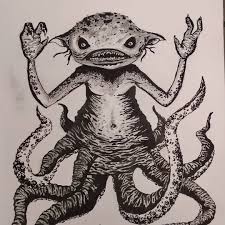 Though Grindylows have a negative attitude towards humans, they generally have a positive attitude towards merpeople. It is believed because they live in the same environment, and have had to coexist for hundreds of years, that the Grindylows and merpeople reached some sort of understanding at some point in time. However, because Grindylows are unfriendly to humans, and hardly anyone speaks Mermish anymore, it is hard to know for sure.

Very little is known about Grindylow habits, due to their negativity towards humans. It is assumed that they are active during the daytime and rest at night. Merpeople will not confirm or deny this with us. Merpeople have confirmed that they make houses out of different underwater plants and that these houses can eventually turn into large endeavors, as babies are born and decide to stay with their family.

Their mating is assumed to be like that of a mammal, and that they have a live birth. Again, merpeople will not confirm or deny this with us, however, they have hinted that they do not lay eggs, because if they did they would certainly be eating them. However, merpeople have confirmed that Grindylows have twins each time they have offspring. This is an interesting concept, considering we don’t see that in many creatures. Grindylows either have a perfect set of twins, one male and one female, or two females. When they have two females, one female will be a freemartin or an infertile female. Baby Grindylows are called either Grindas, by wizards, or Beba, by the merpeople. Grindas feed on algae until they are about three months old, and then fish is slowly introduced into their diet. Grindas can either stay with their family or venture out to start their own family. Most choose to stay with their family, which we know from merpeople comments about families becoming large rather quickly. In studying Grindylow population size, we have been able to determine that each female only gives birth once a year.

A great way to tell the age of a Grindylow, if you can get close enough, is through their horns. Their horns first emerge when they are two years old, and each year after that a small ring forms around the horn. These rings start at the base of the horn and work their way up. In examining dead Grindylows, between six and eight small rings have been found, estimating their lifespan to be between eight and ten years.

Grindylows do have magic. They can create sparks, which are yellowish-white in color, and move objects. They can use these sparks to kill fish and distract humans. It can also be used as a warning symbol when humans are getting too close to a colony, or a group of Grindylows. However, they rarely use their magic and often use handmade spears or other weapons to kill fish. When they do use magic, you can be sure it is because they are extremely angry or agitated.

What is a Dark Creature?

As I mentioned at the beginning of the lecture, Grindylows are considered Dark creatures. This is not to be confused with dark magic or  He Who Must Not Be Named. To be classified as a Dark creature, a beast must do something considered disturbing. In this case, the Grindylow is known to feed on humans, which by definition is very disturbing. However, it is important to note that being associated with Dark magic does not make a beast a dark creature. Grindylows are not associated with any kind of Dark magic, nor have they been utilized by  He Who Must Not Be Named or his followers. I feel this distinction needed to be made very clear, as these are not the only Dark creatures that we will discuss during your time in my class.

Because eating humans has made them a Dark creature, it is important to see this through history. The last reported Grindylow mauling was in 1679 when a magizoologist was researching a Grindylow colony in Europe. The wizard continually harassed the colony, even after having sparks sent at him. The most famous Grindylow mauling was of Uric the Oddball in the Middle Ages. His Fwooper’s cries made him so crazy he fell into a lake near his home. He floated into a Grindylow colony that hadn’t had meat in quite some time because of a fish shortage. While he managed to survive, they did take several chunks out of his torso and legs. There have been several minor attacks, such as being hit by sparks or hit with tentacles, but no true maulings have occurred since 1679.

If you find yourself stuck in a sticky situation with a Grindylow, always remember this: never let them get their hands on you. Their hands, though appearing fragile, are very strong, and it is extremely difficult to break their grasp. The Revulsion Jinx is often said to work well to break their grasp because it shoots boiling water towards them, causing a knee-jerk reaction to release whatever they are holding. Of course, it is best to avoid any encounter getting to this point. Remember to always keep your distance, watch your surroundings, and show you mean them no harm by not approaching them or wielding any weapons. In case you have forgotten how to cast this jinx, I have provided the information for you below.

Finishing on that rather melancholy note, you have a quiz! Use your time wisely and remember to review the content we covered today before attempting it. Next week, we will discuss two creatures known for their unique characteristics, causing them to stand out in the wizarding world. Good luck, and I will see you next week!