The classroom is back to normal today. The only decorations are the ones that are usually there. Professor Rosenquist looks overly enthused as she drops a huge stack of papers on her desk. With a skip in her step, she grins as the last student files into the classroom.

“Here is our final stop! As you may notice, there isn’t anything special decoration-wise in the classroom today. That’s because we will be covering modern alchemy, which is everything from the Renaissance to the present. Can you believe that we’re already at the end of this class? I can hardly believe it myself, however, not all endings are sad. In this case, it’s a happy ending because I’m glad to have taken all of you on this journey. Of course there is the impending doom of the final awaiting you, but I have faith that all of you will do just fine. Let’s go ahead so you will have maximum time to work on your final.”

As you may know by now, the practice of alchemy has not always been restricted to the magical realm. Muggles have experimented with it for centuries in hopes of gaining wealth, fame, or immortality. Of course, they can’t use spells or create potions with actual magical effects and are ignorant to the wizarding practice of alchemy. They typically view it as a mysterious, mystical science. 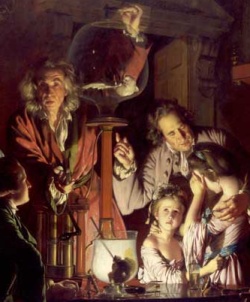 The Muggle practice of alchemy eventually began dying off in favor of modern sciences such as chemistry. They dubbed our field as ancient wisdom. The first line drawn between alchemy and chemistry happened in 1720 and in only twenty years, alchemy was restricted to only gold-making. Academic writers during the Scientific Enlightenment tried to protect the development of modern sciences by making a complete separation between the new chemistry versus the old alchemy. This caused many Muggles to believe that alchemists were swindlers and that the whole science was a fraud. The effects of the academic writers’ efforts still last even into the present day in the Muggle world.

There have been a few who have tried to revive alchemy in modern times, such as General Ethan Allen Hitchcock or Mary Anne Atwood; however, it never rose back to its former glory within the Muggle world. With the establishment of modern sciences, only a few types of alchemy are practiced by Muggles today. Alchemy is practiced when creating Traditional Chinese Medicine and a type of Indian medicine called Ayurveda. Spagyria, a type of practical alchemy that involves using alchemical procedures to create herbal medicine, is more common in western societies. Alchemical symbolism is important in analytical psychology. Carl Jung found a direct link between the symbolic images and the psychic processes in his patients. His writings managed to revive alchemy in the Muggle world from the brink of extinction. Alchemy is depicted often in literature, comics, video games, television, and movies.

While the use of alchemy declined in the Muggle world, the wizarding world saw quite the opposite happen. More and more alchemists came out of the woodwork with their findings, hoping to be the next big alchemist. With the rising popularity of the field, there needed to be some organization to the chaos. International representatives in the alchemical field got together at Casablanca, Morocco in 1960 to discuss the future of alchemy in the wizarding world as well as the direction alchemy was taking within the Muggle world. This group became known as La Ligue des Alchemists. La Ligue des Alchemists is operated by an executive cabinet, as well as a small committee. Every year, they hold a convention for alchemists to come together and present ideas. The organization also uses the convention to address the field on recent important findings. I usually make it a point to go every year because it’s good to keep up with the times (Donato Gessati always brings this delicious tiramisu, but that’s besides the point). The location for the convention is decided by the committee every year. The last convention took place in Geneva, Switzerland. La Ligue des Alchemists elects their president and vice president every ten years through a committee vote. The committee gets re-elected every five years through a vote by the convention attendees. If you look at the chart on the right, you can see the current members of the cabinet and the committee.

In the first meeting, the members of La Ligue des Alchemists decided on three laws that needed to be followed by every alchemist. The first law states, “You shall never take the life of a fellow wizard, Muggle, or creature for the sake of practice.” This law basically falls on the principle of ethics in obtaining ingredients. It’s also based on the belief that your soul is pure and innocent. Whenever you take the life of another, your soul becomes tainted and it will fracture. However, the reason that the law was enacted was due to an incident that happened during a convention in 1963. A dark wizard named Vigo S. was a committee member of La Ligue des Alchemists. No one knows what his last name was because every document and record of him was erased. Vigo S. wanted to create a horcrux for the sake of extending his own life. During a private committee meeting at the convention, he killed the first four committee members he saw with the Killing Curse. The other members fled the room and the Vice President managed to successfully stop his rampage.

The second law is, “Never betray your fellow alchemist.” While Vigo S.’s notorious plot does technically also fall under this rule, this law was geared more towards protecting any work made through a collaboration in the alchemical community, or in general. This law protects against plagiarism in scholarly findings. Of course, even though there is an anti-plagiarism law, someone is going to claim another alchemist’s work as their own regardless because there is always that one person. That being said, how did the committee know if someone broke this law? The members of La Ligue des Alchemists in 1981 created a spell that could identify a work’s rightful creator. They called this the Indication Charm.

Wand Movement: Make a circle around the object in a clockwise motion.

Whenever an alchemist brings an artifact, or anything else of important alchemical value, to present at the convention, they appear before the committee to evaluate its true creator. The object is placed onto the table and the alchemist who brought it in must place their wand on the object before the evaluation begins.

If the person who brought in the artifact is its true owner, there will be a blue burst of light and a small ball of light will shoot into the air when the spell is cast. If the person is not the true owner, there will be a black burst of light. The object itself goes into what I would call a “defense” mode. It will shoot out more black light and imprint the word “THIEF” onto the perpetrator’s forehead. In all honesty, you can probably try out this spell on your or your friend’s essays if you really want to. It’s fairly easy to perform as long as you focus on the pronunciation.

The third and final law is, “Do unto others as you would like them do to you.” This is common sense and fits along with the two previous laws. Obviously, don’t kill people if you don’t want to die… Actually, don’t kill people at all since that can land you in Azkaban. If you’re in a group project, don’t betray your group members’ scholarly trust by not giving them credit. Think about it, if you spent hours of work on something, you would be mad that the person who turned it in didn’t put your name on it, right? Basically, treat each and every person with respect. That includes your professors, family members, friends, colleagues, and classmates. Don’t be a jerk.

Well, that’s it for today! I hope you enjoyed touring the world with me. When you’re ready, go ahead and take the final. Drop it off in the tray on my desk on your way out. I thoroughly enjoyed having all of you in my class and I hope you consider taking Alchemy in Year Four!