There are suits of armor lining the walls of the Alchemy classroom today. In fact, they look very similar to the ones found in the hallways. The walls have medieval-style murals painted closer to the ceiling. The chairs seem to be replaced with fancier dining chairs that also resemble some from another part of the castle. A shield hangs on the wall behind Professor Rosenquist’s desk and it appears to have the Rosenquist family crest on it. Other than that, the room looks pretty much like it does on a normal day in the castle.

Professor Rosenquist is patiently waiting for students to file into the classroom. She plans to start the class as soon as possible, hoping to distract the students from the suspicious chairs and suits of armor.

“Hello again students! I hope you enjoyed our detour for the last three lessons, however, it’s time to get back on track with our trip to the West. We will be looking at the roots of alchemy in Europe and its rough clash with religion. This lesson and the next lesson are going to tie into each other mainly because the Medieval period (476 C.E. - 1500 C.E.) and the Renaissance period (1300 C.E. - 1600 C.E.) have a two hundred year overlap.”

Left in the Dark 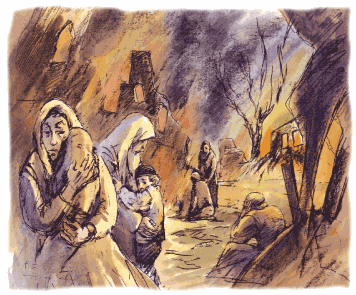 While Eastern alchemists were busy at work, what exactly was Europe doing? Unfortunately, the continent was in the tight grip of the Dark Ages, a time during the Medieval period where intellectual growth and innovations of any sort were stagnant. Warfare was frequent and urban life had pretty much disappeared. The Dark Ages began after the fall of the Roman Empire in 476 C.E. and lasted until 1000 C.E. Any sort of European alchemical movement was in a dormant phase. 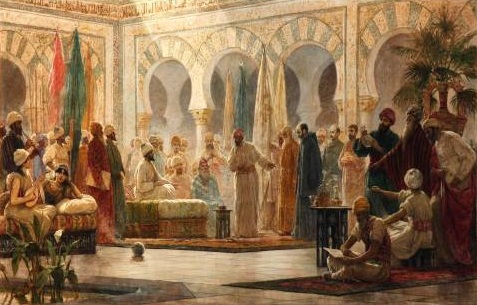 In Lesson Three, we learned that the Arabian invaders brought alchemical manuscripts from Alexandria to Spain in 711 C.E. Their rule over the country lasted over seven hundred years in which the tolerant government provided a safe haven for persecuted minorities at the time, such as the Jews. The Islamic rulers also encouraged learning during their rule, leading this small time period to be nicknamed a mini-renaissance.

When alchemy manuscripts were first translated into Latin in the early 1100s, they spread like wildfire all over Europe. Scholars embraced these new ideas, which caused a high demand for the texts. However, due to the fact that there were almost six full centuries of no learning, alchemy proved to be very difficult to learn. It was very complex, full of special jargon, and covered in symbolic images. Early European alchemy students preferred literal interpretations over cryptic messages as they failed to grasp the ideas of this new field presented to them. Interpreting anything in alchemy’s multi-level language with no guidance resulted in a complete disaster. European alchemists had an imbroglio of contradicting concepts and complete gibberish.

However, one thing stood out amongst all the gibberish, and that was that alchemy was about making gold. Although early European alchemists never did produce gold with their attempts, they did discover a myriad of new compounds, alloys, acids, and alcohols. Alchemy had soon become the leading intellectual movement of Europe.

After several commentaries were written to aid aspiring alchemists understand the texts brought by the Arabs, Europeans began to understand the cryptic language more and more. Soon enough, Europe was producing its own alchemists such as Albertus Magnus and his student St. Thomas Aquinas. However, probably the most famous of the time was Roger Bacon. 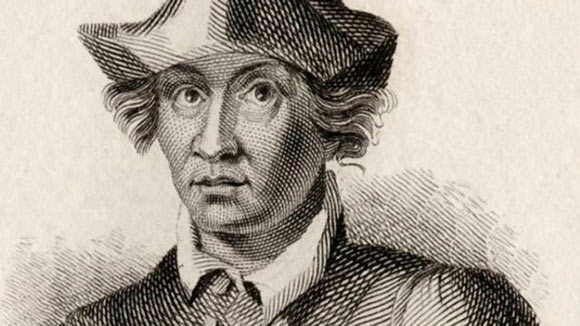 Roger Bacon (1214 - 1294 C.E.) was a Franciscan friar from Somerset, England who went on to study mathematics and medicine at universities in Oxford, England and Paris, France. Needless to say, Bacon was a genius in several disciplines. Much like Leonardo da Vinci, Bacon created inventions and drew out models of tanks, helicopters, airplanes, submarines, and other mechanisms. He created a version of the Gregorian calendar that was more exact and we still use it today. He built early microscopes and telescopes as well as constructed an observatory. He even drew one of the first complete maps of the world. Roger Bacon was definitely ahead of his time. 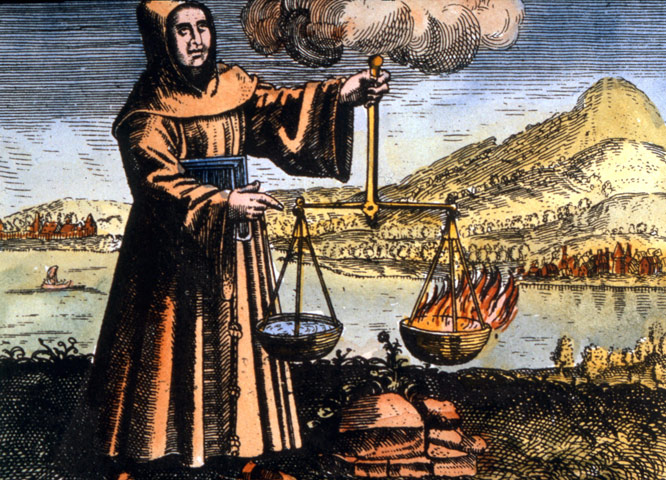 Roger Bacon was brought into the alchemical field by someone he referred to as the Lord of Experimentation. There’s speculation that this person was a mysterious Frenchman named Master Peter and there’s other suggestions that the Lord of Experimentation was actually Albertus Magnus. Regardless of who Bacon’s teacher was, he rapidly became Europe’s leading alchemist. He produced powerful tinctures and elixirs, shared formulas for several useful compounds (i.e. gunpowder), and was rumored to have achieved successful transmutations. Being able to successfully transmute metals at this time was considered to be a huge accomplishment because any sort of instructions for transmutation were either hidden by cryptic symbols or lost.

For the wizarding world, Bacon’s accomplishments were breakthroughs that pushed the European study of alchemy forward. Unfortunately, the Muggles weren’t as accepting of Bacon’s work. His Muggle colleagues claimed that he was in league with the devil and that he created a talking brass head that revealed dark secrets, as well as a mirror which allowed him to see into the future. Bacon was known to be antisocial, which probably made the rumors worse. 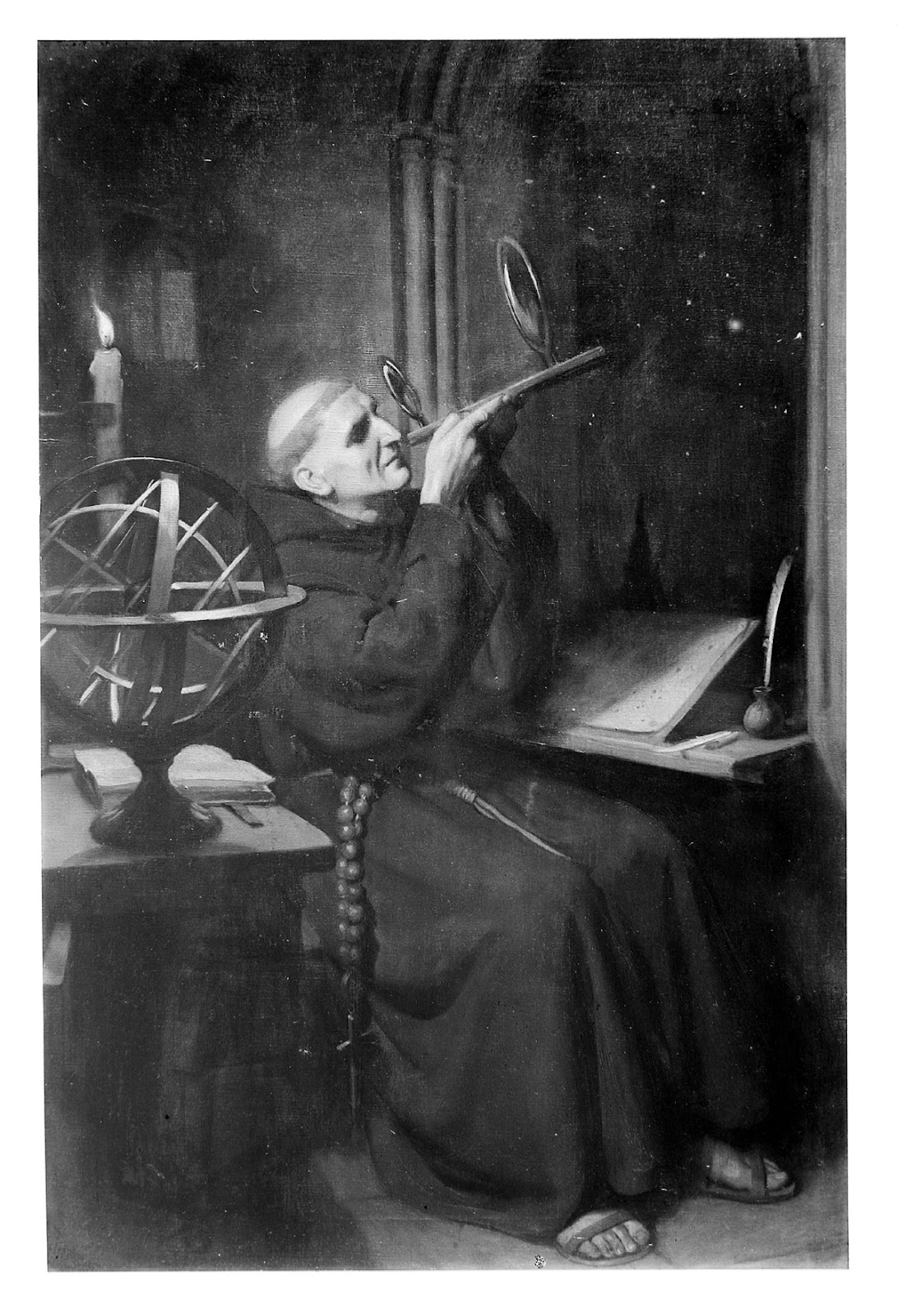 Despite the fact that he was a friar, Bacon’s most notable opposer was the Catholic Church. He was constantly in trouble with them and the Church kept a close watch on his activities. In 1257, the Church court accused him of practicing sorcery and placed him under house arrest. Pope Clement IV released him from his sentence in 1267, however, only on the condition that Bacon wrote down all his knowledge in one book. This book was the Opus Majus (The Major Work), a compendium of philosophy, mathematics, and science.

Nevertheless, the feud raged on. Bacon criticized the Church continuously and declared ancient Egypt and Greece were morally superior to the Christian world. Obviously the Church didn’t stay quiet and they arrested Bacon for heresy in 1278. Bacon was released fourteen years later after sharing alchemical secrets with the head of the Franciscan order. Now free, Bacon continued to defy the Catholic Church by writing Compendium Theologiae, a book about the theological errors and faults of Catholicism. Thankfully he escaped prison this time due to his new ally in the Franciscan order. When he died in 1294, his fellow monks took all of the books in his library and nailed them into their shelves so they could rot unopened. The Catholic Church never forgave Bacon, and his works are still banned.

Run-ins with the Church

Roger Bacon wasn’t the only one to have a conflict with the Catholic Church. In fact, this was how most relationships between alchemists and religious authorities were in the Middle Ages and the Renaissance. Some alchemists compromised to avoid conflicts by hiding their work in Christian terminology. For example, they would refer to the Philosopher’s Stone as “Christ.” Other alchemists went into hiding or simply stopped publishing their ideas. 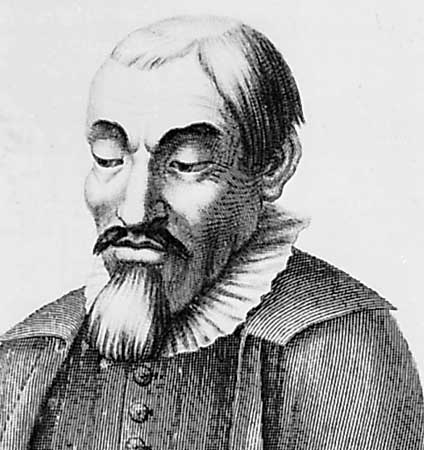 However, most alchemists refused to compromise. They weren’t going to let Church authorities boss them around. This led to several trials, arrests, practices of torture, and even murders. The Church was suspicious of alchemists’ preoccupation with meditation and spiritual development. One case in particular that exemplifies the unsympathetic position of the Church was the heresy trial of Miguel de Molinos. Molinos advocated meditation and quiet contemplation. He stated that anyone could practice prayer and meditation in the privacy of their own home. The duty of the Church was only to preserve ritual and maintain the physical presence of the Church and not to invoke the spiritual enlightenment of individuals. To the Church, this crossed the line. So the Church banned all of Molino’s writings and sentenced him to life in prison. Molinos died nine years later in his cell. Other people, such as Giordano Bruno, an alchemist, were tortured and sentenced to death by burning.

Obviously, the Church’s fury wasn’t just directed toward alchemists and people practicing spiritual development. Anyone who was caught healing with herbs or using natural cures was accused of practicing the black arts. The Church determined that the devil caused all diseases and they could only be cured through exorcisms performed by priests. Girls could be tortured for witchcraft from the age of nine and boys from the age of ten. Homosexuals were also thrown into the fires of burning witches. The Church even imprisoned and burned cats because they proclaimed that all cats were demons. Since the Church killed so many cats, the rat population rose, which in turn contributed to the spread of the Black Death in the fourteenth century. It was definitely not a good time to be alive.

That is where I would like to end it for today. As we are closing in on the end of the year, you should have a better idea of where you stand in this class in terms of grades. I would like to put out a reminder that if you have any questions about the course, feel free to send my PA team, my head student, or myself an owl.