Good day, everyone! Today we will be learning about Doxies and pixies. Now last year, we learned about fairies. I request that you do not make any parallels between fairies and Doxies and pixies, until reading the lesson entirely. They are different creatures, and each have different characteristics. Like Muggle butterflies and moths; they are similar in appearance, but contain different characteristics. I will first cover Doxies, then pixies. I will then compare Doxies, pixies, and fairies, to prevent any confusion from arising.

Let’s start with Doxies! Doxies are found throughout America and Northern Europe. They prefer colder climates. In America, they are found in the north and the east. It is believed, for this reason, that it is possible Doxies might migrate to inhabit other cold regions of the world, like Antarctica or Greenland, in the near future.

Doxies are omnivores, eating the foliage from the trees and bushes around them, and different insects and arachnids that they find in their environment. Interestingly, it has been found in times of stress that Doxies actually prefer to eat more leaves and greens, instead of beetles and spiders.

Doxies resemble a small human, averaging between five and six inches tall, similar to their relative we covered last year, the fairy. However, unlike a fairy, a Doxy has thick black hair covering its entire body. Doxies also have an extra pair of arms and legs. They have five fingers and five toes on each hand. Doxy wings are thick and curved, shiny like a beetle's.

Doxies also have double rows of amazingly, extremely sharp teeth. These teeth are incredibly venomous. An antidote needs to be taken if you are bitten. While a Doxy can have as many as X teeth, Doxy bites typically display between seven and twelve punctures. Doxies only bite you with the front teeth, because they have the most venom. The bites themselves will not swell up, but will turn a sickly green color. And, if left unattended, a Doxy bite will scar, color included.

Doxy venom will also cause the bitten wizard intense muscle pain. After the pain ceases, the bite will sprout thick black hair around the punctures. The only way to remove this hair is to go to St. Mungo's, where they will use a special potion that degenerates hair growth specific to these wounds.

Doxy mating is unlike a fairy's. Doxy males make buzzing noises with their wings, attracting females. A female then picks a male based on how appealing the buzzing is. They then follow like the fairies and disappear into their environment by hiding in the vegetation.

Doxies will lay up to five hundred eggs and bury them in the snow. These eggs will then hatch fourteen to twenty-one days later. Doxy babies never leave their parents, and assimilate into the Doxy community around them. These eggs are laid during the winter, usually in late December, so they will hatch in the middle of January.

Doxies are considered pests in the wizarding world; however, many people choose to keep them. The people that keep Doxies hope that they can sell their venom, for various reasons. Fred and George Weasley, of Weasleys’ Wizard Wheezes, used Doxy venom in their Skiving Snackboxes. Doxy venom is also used as a potion ingredient. If you are in the group of people that do not like Doxies, you can purchase Doxycide, a black liquid that knocks them out, to protect yourself from their bites. Doxy droppings are also great to use to trick people. When they are ground up, they appear to look like many different substances, such as dried dragon claws.

When creating an environment for a Doxy, if you are keeping them to collect the venom, you will need to provide a cooler environment. Many breeders have an entire room dedicated to their environment, because of the temperature requirements. Foliage must be provided for the Doxies to hide in. Food, if you are supplementing their diet, should be given two or three times a week. It is important that they have a full winter, snow included, because this is when they lay their eggs for the year.

Collecting the venom proves to be a very difficult process. You have to entice the Doxy to bite a dummy finger, which will then extract as much venom as possible from the Doxy. It is best to charm the finger to absorb the venom. Once the Doxy realizes what is happening, it will pull away. It’s at these times that Doxies can be most negative towards humans. You should give them extra foliage after you milk, or collect, the venom from them. This will help put them at ease. 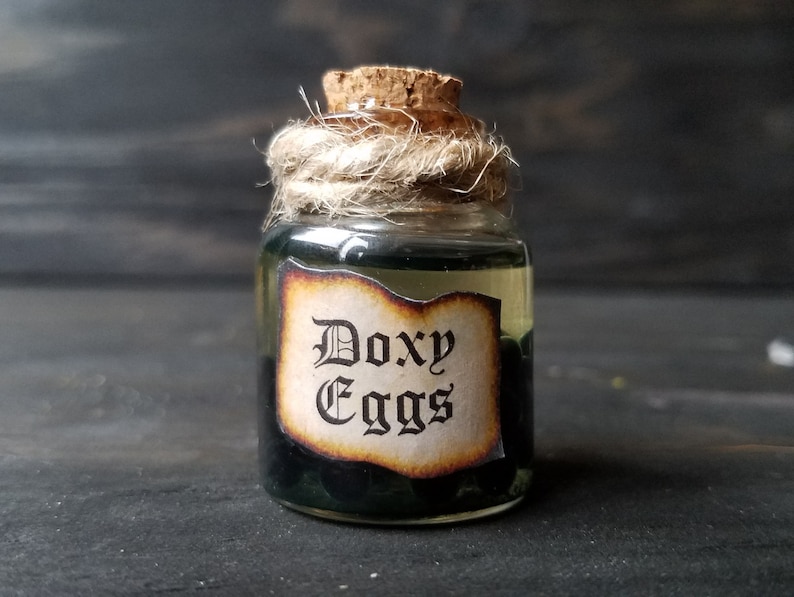 Enticing the Doxy to bite the finger proves more difficult than the actual collection. It is best to have the dummy finger inside the environment and charm it to follow and poke the Doxy. This will annoy the Doxy the first time or two. However, the Doxy will become more tolerant of it, and it will take more effort and patience for future milkings.

Doxy eggs are also collected, and used in potions, specifically the Girding Potion, or the endurance potion. Doxy eggs are black in color and can have purple spots. Eggs will have to be collected while the Doxy is distracted or asleep as Doxies will not notice their eggs are missing until they are supposed to hatch. If they discover the eggs are missing before then, the Doxy will be very irate and angry until more eggs are laid.

Pixies: The Mischievous One 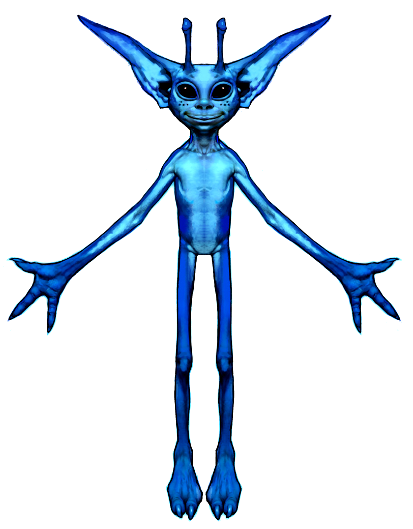 On to Pixies! Pixies are small, electric blue creatures that grow up to eight inches tall, and are native to Cornwall, England. It is for this reason that they are also called Cornish pixies.

Pixies are omnivores, meaning that they eat plants and protein, in the form of insects. They will eat the plants and foliage available to them. Pixies prefer to eat beetles, versus arachnids and butterflies or moths.

Pixies are known to be very mischievous. They tend to play pranks on humans, like picking people up by their ears and putting them on top of things, like tall trees. Pixies do not have wings but can fly. This is because they possess magic similar to a House Elf in strength, and can make themselves hover. Because they can pick people up, it is believed their magic makes them stronger than expected for their size. The more powerful the pixie, or the older it is, the heavier the weight it can pick up.

There are two famous cases of pixie mischief. The first occurred in the 17th century, in Cornwall, England. Dymphna Furmage, while on vacation, was kidnapped by a pack, or group, of pixies. After she escaped, she made it her life goal to convince the Ministry of Magic that all pixies should be exterminated. She was still unsuccessful, as of her death in 1692. The second most famous incident, due to the popularity of the man, was when Gilderoy Lockhart, then Defense Against the Dark Arts professor at Hogwarts School of Witchcraft and Wizardry, let pixies escape during a class observation. Lockhart was unsuccessful in controlling the pixies, and they were eventually caught by Hermione Granger.

Cornish pixies make buzzing noises, but it is so shrill that only other pixies can understand it. They use this buzzing noise to communicate. They talk back and forth and agree to mate through discussion. Mating occurs like other mammals, and they bear live young. Each pixie will only have one baby at a time. There have been documented cases of twins, but this is very rare, and the last documentation of this occurring was in 1681 by Furmage, when she was spying on a pack, trying to collect evidence of their atrocities for the Ministry of Magic.

It takes an average of four to six months for the baby pixies to mature into adult pixies. They will be ready to breed at this time. The gestation period for pixie mating is 28-31 days or about one month. They care for the baby until it is about three months old, and then breed again. With this in mind, we can say that they have an average of three babies a year. Pixie babies will stay with the pack for the duration of their lives. Pixies do not mate for life, and instead, mate with the most available pixie after discussion. This is seen as normal, even if the male pixie just bred with a female.

Pixies are considered pests in the wizarding world. While there is no potion you can use to rid the area of them, you can use the Freezing Charm to freeze them and move them into a cage, or different environment. It is not recommended to take on a pack of pixies alone, as they will soon have you on top of a tree.

Now, let’s compare these three creatures -- Doxies, faires, and pixies -- so you can understand their differences. I’ve provided some charts, which will hopefully help in any confusion that has arisen. Please take note of these charts, and copy them for future reference.

As you can see by this chart, all three produce buzzing noises to attract mates. However, only Doxies and fairies lay eggs, while pixies have live birth, like other mammals. Doxies will lay up to five hundred eggs, whereas fairies will lay up to fifty. 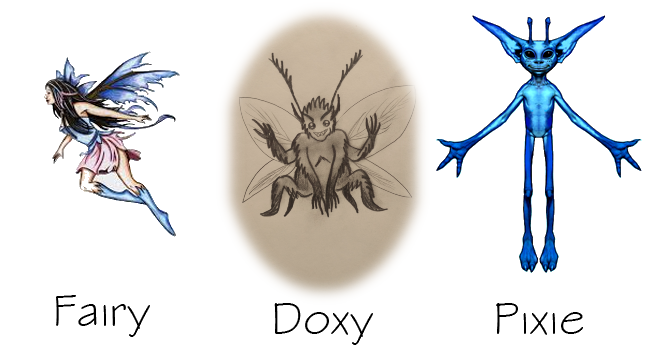 I hope these charts have come in handy in understanding the differences between these three very similar creatures. Today another journal entry is due, so make sure you are ready for that. Remember, you must include your previous entry as well.

In your second year of Care of Magical Creatures, we will explore and discover thirteen different creatures. These creatures range from pests to mythological creatures. A wide variety of creatures will be studied, from wizarding pets to demons. Different aspects of the creatures, like genetics and disease information will also be covered.
Course Prerequisites:

Enroll
Hogwarts is Here © 2023
HogwartsIsHere.com was made for fans, by fans, and is not endorsed or supported directly or indirectly with Warner Bros. Entertainment, JK Rowling, Wizarding World Digital, or any of the official Harry Potter trademark/right holders.
Powered by minerva-b