The professor can be seen in the back of the classroom, rummaging through stacks of papers, cabinet doors flung wide. Oblivious to nearly everything but her quest, students simply shrug and take their seats as they trickle in. Just a few moments before class is due to begin, the historian lets out a gleeful “AHA!” and emerges holding a parchment tightly in her fist.

Still wearing a triumphant expression, she turns and sees the class assembled and ready for her. Smiling in welcome and perhaps a bit of self-depreciation, she takes her prize up to her desk and stashes it safely on a corner with a pat before beginning the lesson.

Welcome back to the fifth lesson of History of Magic, I’m sure you’ve learned a lot from your assignments regarding the Silk Road last week… or at least I hope so! Today we’ll be looking at an empire and, by extension, a person that was briefly mentioned during our lesson last week. Let’s begin, shall we?

Khan You Believe It?

Today we are going to discuss one of the most crucial individuals in Asian history: Genghis Khan. But, as is the way with history classes, we need to go back further into the past before we delve into the complexities of the man in question. 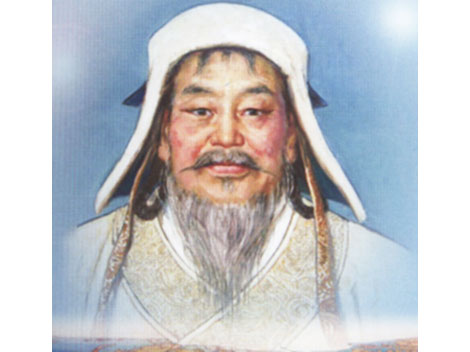 Genghis Khan was born with the name Temujin. His surname, if those were to exist at the time, might have been Borjigin, after the clan to which he and his father’s family belonged for many generations. Khan, then, is not a name, but a title. Those not well-versed in Eastern culture and history (and the fact that there were many Khans before and after the infamous Genghis Khan) may be unaware of this.

In its most basic form, the term “khan” simply means leader, though the term held many nuances and additional meanings over the years, depending on context. Most often before Temujin’s rule, the term khan referred to the leader of various Mongolian tribes. However, Temujin’s rule changed things irreversibly. After his rule, the term Khan was used in many ways, but, as we will get into in this lesson, it was thereafter the title for the leader of the Mongol Empire.

Interestingly, Genghis Khan was born from one of these various tribe leaders. However, due to frequent wars and in-fighting, his father was murdered. Upon his father’s death and the loss of their family’s importance, Temujin, his mother, and his siblings were all abandoned. Genghis Khan’s mother, Hoelun, was forced to forage and hunt to keep her five children alive. This period of Genghis Khan’s life taught him a great many things: the skills to survive, hunt, and track, and that his nation could not be stable and prosperous if it remained divided as it was.

Genghis Khan’s rise to power and the beginnings of the Mongol Empire in the early 1200s were gradual and bloody. While he was able to cement an alliance with one of the Mongolian tribes through marriage, he was only able to do this once. Much of his empire was built on slaughter and a series of brutal conquests. He quickly integrated battle strategies from other civilizations and used what many today consider bloodthirsty and savage tactics to ensure no groups were able to enact revenge. He was, without a doubt, a ruthless war leader, responsible for the deaths of an estimated 40 million people. In some countries, such as Iran, the Mongolian Empire’s conquest had such a long-term effect that it is only in the last century that their population has bounced back to pre-conquest levels.

However, to give the warlord credit, he did use his share of less fatal approaches. Whenever possible, Genghis Khan offered his foes the chance to surrender and simply pay tribute instead of engaging in war. Strategically, this was considered beneficial for both parties. The Mongolian Empire gained territory without any losses instead of gaining the destroyed husk of a nation. Meanwhile the conquered nation was able to avoid bloodshed and retain some autonomy (in that they were able to keep their own laws, traditions and rulers… provided they did not go against the Mongol Empire in any way). Particularly in the beginning of his campaigns, when he was attempting to unite the Mongol tribes, he did not attempt to eradicate a conquered tribe, but instead gathered them into his own, ever-growing tribe and cared for them, even going so far as to adopt orphaned children.1 Additionally, though not an entirely merciful tactic, the Mongolian leader had a strong preference for espionage, hoping to discover what motivated his enemies rather than simply chop them up with a sword.  Moreover, Genghis Khan’s methods were not that unthinkably brutal for war leaders of his time-- though in the present day, violent bloody takeovers are much less acceptable. Many of his practices were indeed quite violent -- he engaged in war far more often than diplomacy -- but war was the norm for Mongolians and other regional tribes in this area, as these various tribes were nearly constantly engaged in wars with one or more tribes.

The Man, the Myth… the Magician?

As you might expect, there are quite a few sources regarding the infamous man known first as Temujin. Many, particularly in heavily war-torn areas, are negative depictions. Other areas, like Mongolia, Japan, and parts of China, celebrate Genghis Khan as a great, wise leader. Obviously, all of these accounts are partially biased in some way or another. To make matters worse, as Professor Morgan so expertly pointed out in the beginning of the year, some of these accounts were made by Muggles, who knew little of what they were seeing. Just like in Arthurian times, like we covered in Third Year, accounts of magic users are quite obscured as to what is true and what is fabrication.

Yes, in case you didn't catch that, Genghis Khan (and likely his mother Hoelun and at least one of his brothers) was magical. While there is no doubting that he had a keen mind for military tactics and was a flexible and bold strategist, these are not the only reasons he was able to build such an expansive empire despite a difficult childhood. His network of spies referenced above was, in fact, not nearly as large as history describes it. Instead, he was largely able to get information from predecessors to modern-day truth serums, spells of compulsion, and even, some attest, a middling ability in Legilimency.

Moreover, the Mongol horde is still today spoken of in awed tones. At the time, it almost seemed as though the army appeared in a cloud of dust. This, as we know, is a clear sign of Apparition, though it remains to be seen how large groups of stampeding warriors were able to Apparate, particularly if they weren’t all magical. However, they would certainly not be the first nomadic, Asian warband to have accomplished this feat, if you remember back to your First Year and our discussion of the Huns. This evidence all points to the fact that a different manner of Apparition was prevalent in Asia in these periods, though it has been lost to time, like many other ancient and quasi-ancient magical practices. 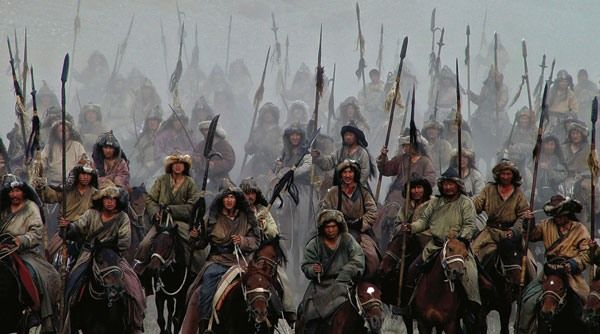 Additionally, his battle-magic, of course, was proficient, and he strove to integrate magic as much as possible, inscribing runes into weapons, siege engines and armor,2 fortifying his armies with potions and practicing arithmancy to determine auspicious battle plans.The Khan’s magical abilities, of course, do not make him a decent person, though they provide a good deal of context for an otherwise seemingly superhuman man.

Effects of the Mongolian / Mongol Empire

Whether or not you view Genghis Khan as a mass murderer (among other things) or a bold, meritocratic3 bringer of unity, there can be no doubt that he exerted a great influence over Asia, and, by some measures, still does to this day.

By the end of Genghis Khan’s life, spanning 112 years,4 his empire (the Mongol Empire) stretched across more than 5,000,000 square miles. The prolific expansion continued after his death to end, at its peak, at agrand total of 9,266,452 square miles in 1309 CE, covering roughly three fourths of present-day Asia. In addition to the sheer number of territories united, Genghis Khan also created a more unified civilization in two other ways: the expansion of the Silk Road via the expansion of his own connected empire, and the creation of a mail system. Both of these were aided by magic, in terms of building safe roads and other infrastructure quickly.

Another interesting byproduct of the late Genghis Khan was a change in population. No, I am not talking here about the 40 million people he slaughtered, though that certainly made an impression as well. What I am referring to here is the overall effect on the demographic of the Asian --and in fact, worldwide-- population. Through genetic testing of males (who pass on identical Y chromosomes to their children), there are 16 million males in the current Asian population that can trace their lineage back to him. This, of course, only counts one half of the population, as women cannot be tested in this way (distinctively lacking a Y chromosome), so the numbers could easily be double this. The means through which this feat of genetics was achieved are certainly not ideal; many of these children were born of women Genghis Khan took as wives after conquering their tribe, city, or nation, which by today’s standards was often tantamount to rape (though, of course, no accounts regarding the consent of the women, or their opinions on their “marriage” to the Khan were recorded, apart from his consort and empress). However, regardless of how it happened, it did happen, and now somewhere between eight to sixteen4 percent of the Asian population can trace their roots back to the man. This may account for the high prevalence of magic in these countries, which, in turn, may account for their more accepting views on witchcraft itself.

With that, I think it is well-past time I close the lesson for today. That is quite enough information to try to grasp immediately before a midterm, even if you will have already completed the work prior to opening this lesson. I look forward to seeing you again next week! In addition to your midterm essay that you’ve been working on since the second lesson, there will also be a minor quiz on the subjects covered today.

Do feel free to contact myself or my grading team with any doubts regarding the midterm or other assignments this week!

Known as the largest continent in the globe, Asia is home to many mysterious cultures and beliefs that are unfamiliar to us, but no longer! Come explore the many wonders of the continent to the East and its rich history.
Course Prerequisites: