Over the course of the next two lessons, we will be talking in depth about Asia. Specifically, we will be talking about ancient Mesopotamia, Phoenicia, and the Indus River Valley this week, while next week we will cover the Asian Steppes and China, along with other minor civilizations.

To begin, we will look at Mesopotamia, one of the earliest civilizations known to man. Muggle history often describes it as the "cradle of civilization" or "the fertile crescent" and we study it for the same reason. Mesopotamia is Greek for "the land between rivers" because of its positioning between the Tigris and Euphrates. Despite the amount of history that I would love to cover regarding Mesopotamia, we will focus today on the city-state of Sumer. 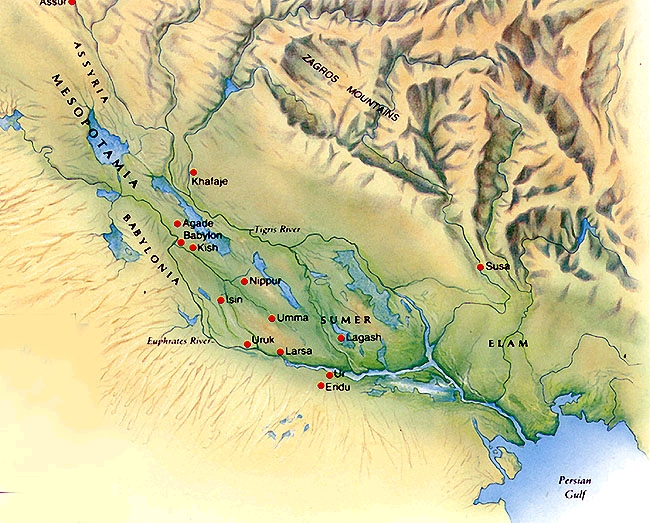 Here you can see a map of Mesopotamia in green, with the city-states and rivers included.

Sumer, located south of Akkad, was one of the most important city-states in Mesopotamia. Sumerian people were among the first in the world to create potions, specifically healing and defensive potions. The potions they created were so wild, and so magically potent, that when archaeologists found an amulet tainted with this magic in modern day Iraq several thousand years later, they ended up in St. Mungo's for over three months. The strength of this magic is a testament to how strong the people of this time were, and how unforgiving their magic was. Modern-day potions tend to be much more controlled and diluted.

Magic was an important factor in Sumerian culture; however, they couldn't explain it the way we can today. In their minds, magic was a sign of godliness. They often revered those they saw using magic, as it was seen as a gift from the gods, when in reality they were just wizards and witches. However, these witches and wizards wouldn't have known this themselves, so they often accepted this theory, and became immortalized as gods and heroes.

One such case is in the Epic of Gilgamesh. Gilgamesh was the fifth king of Uruk and is often described as two-thirds god, one-third man. This is, as usual, Muggle misconception. He was, in fact, a wizard. He reigned for 126 years as king (old even in wizard standards for that time). Interestingly, it’s possible that Gilgamesh may have used magic to prolong his life. A magiarchaeologist and potioneer, Akim Malaam, found the remnants of a very weak immortality potion in Sumer that is currently being studied at the Iraqi Institute of Potioneering and Magical Medicine.

As far as other extraordinary feats, Gilgamesh is also said to have fought a beast known as the Huwawa (or the Humbaba).  Magihistorians originally claimed that this beast was an ancient predecessor to our modern-day dragon species, but we now know from more accurate descriptions of the beast that it seems to correlate more with the Nundu.

As a side note, the story of Ja’mam Biba bears mentioning briefly before moving on from this area of the world. Ja'mam Biba was a Muggle woman living in Babylon (a city within Akkad, just north of Sumer). She wrote what is known as the Letter of Severance, which survives today, about a terrible pain she experienced when several of her teeth were pulled from her mouth and her eyes were gouged out of her head by a man who never touched her. This letter, in addition to being an invaluable resource for magihistorians and anthropologists, is also believed to have led to the creation of the Hammurabi Code, or the code of law for ancient Mesopotamia. However, the letter paints a darker picture as well.

Unsurprisingly, this letter only hints at some of the tensions that were already growing between magical and non-magical people. At the same time as the Hammurabi Code was being written, mass murder of magical people in Akkad and Babylon was commonplace. It’s unclear whether the unknown wizard in Ja’mam Biba’s letter believed he needed to defend himself, or if he in fact was the aggressor, but whatever the case, there was violence and tension across the city-state. While those to the south in Sumer revered their magical brothers as seers and mystics and heroes, those to the north feared and killed them, perhaps with just cause. History is often difficult to piece together fully.

The next culture we will look at is Phoenicia, a highly magical culture that not only had prolific wealth, trading, and seafaring prowess, but also had an excellent form of writing known as Phonecian, a famous descendant of the equally famous Proto-Canaanite Alphabet. 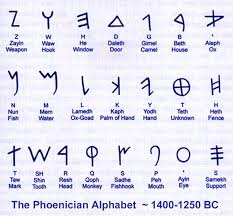 Many Muggles have tried to decode this mysterious language to no avail. Unsurprisingly, they always seem to be missing something. Indeed, even our own best linguists and runologists have had trouble with this script, though the secrets have been recently cracked. Our Ancient Runes instructor, Professor Wessex, is a linguist as well as a former magiarchaeologist and has studied the Phoenician language for some time. As I hear, she is quite the expert on the topic! I believe she even covers these entrancing symbols in her course for Sixth Years.

But since Sixth Year is quite a ways off, let me give you some background about the Phoenicians. They used magical woods in many of their boats, as they were a well-known maritime power and skilled traders. Their boats were protected by charms and enhanced by their use of the magical wood, though at the time they didn't know it. The use of these woods is most likely what made them such a strong maritime force, as no culture to this point had used magical woods for their boats or enchanted them.

Additionally, spells have been found in Egypt that date back to Byblos (a Phoenician city). One such spell was one that read "rir-rir or wal lat ick nur geg". This spell's introduction suggests it would have done something similar to Vipera Evanesca (the Snake Banishing Charm). Phoenician spells were often done ritually and wandlessly. Professor Virneburg, the current Charms professor, has worked alongside many charms experts, including Garrick Ollivander, to study ancient wands and the power, or lack thereof, that they possess. Though from what I understand, Professor Mitchell once had to help Professor Virneburg when she found herself accidentally turned into a toad due to a particularly strong backfire from an ancient wand. Even the best of us should exercise caution, students!

Lastly this lesson, we will talk about the Indus River Valley and its corresponding civilization. The Indus were a highly magical group of people. As mentioned in Bathilda Bagshot's "A History of Magic," almost 80 percent of their artifacts (if not more) bear some sort of magical power or trace. The most amazing thing is that much of it is concentrated. While around this time, magic generally took much more sporadic and wild forms when compared to our contemporary spells and potions, those living in the Indus River Valley possessed an unusually concentrated and well-attuned magic. For example, their magic was so refined at this time that their magic can be identified, even down to a bracelet enchanted with a primitive Cheering Charm. Most often, when magiarchaeologists and curse-breakers need to identify what kind of spell is placed on an object, they have to go with whatever is “close enough,” but in the Indus River Valley, the spells are much closer to our modern day ones. The particular artifact I mentioned can actually be found in Professor Virneburg’s office, as she bought it years ago at an ancient artifact auction. 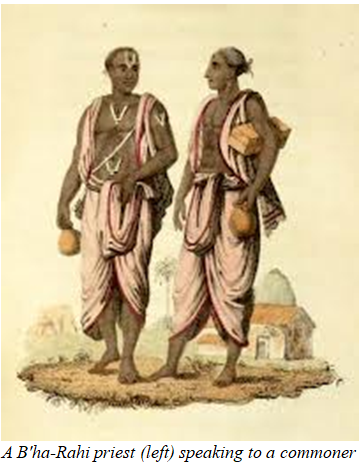 During the time of the Indus River Valley civilization, the caste system was just starting and those with magical abilities often found themselves on the topmost tiers. In those tiers, we find a group of magical priests or Brahmin known as the B'ha-Rahi Brotherhood. These brothers protected the villagers from the Lahoo Vampires for decades.

To provide a little more background, Lahsun (a chieftain of the B'ha-Rahi and best known as "The Divine One" in ancient texts) was well-known for his extreme disdain for vampires. He fought and killed many of them and taught the villagers ways to protect themselves, including the use of garlic, and wooden stakes. It should also be mentioned at this point that “civil” vampires, which you will discuss in your Defense Against the Dark Arts classes, were essentially unheard of, and vampires often were a terrifying plague on any hapless Muggles unable to defend themselves. In case you were wondering, Lashun was indeed a wizard, and perhaps one of the earliest great wizards of this area. However, as was commonplace at this time, he was idolized as a god by himself and his people.

That, however, wraps up part one of our discussion of Asia! You have one assignment due this week, but many in the upcoming lessons, so keep an eye out. You'll also want to start revising for your midterms that will be happening in the next lesson.

Next week will be Lesson Five and rather than your usual assignments, there will be a midterm for you to tackle! It will be roughly 25 questions and will cover everything we've learned so far. I'll see all of you in the next lesson!