[]Hogwarts Facts[]Fuck you, fuck you, oh and you too. Get the hell out of my face unless you want me to tear it off.
[Wand] 10 inches, Oak, Dragon Heartstring, Rigid
[Patronus] Hyena
[Pet] none
[Ilvermorny House] Horned Serpent
[Animagus] He seems to be the only one who shifts to that of a Wendigo.
[Random Fact] He has tattoos littered across his body, the deatheater symbol on his left forearm. He used a spell to make them all disappear whenever he enters Hogwarts so no one will suspect him. 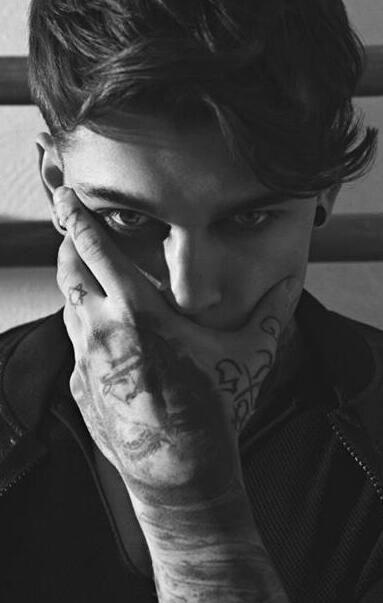 Accent (if any): A tad bit of German but it also sounds strongly Australian at times.
Language spoken: English
Other languages known: German, Spanish, Dead English, Slovakian, these are only a few.
Style of speaking: He has a lazy style of speaking, as if he considers every conversation dull. When angered his voice grows hoarse and beastly.
Volume of voice: Low, but can be heard, at times when he yells or is angered it is like a howl. [MONSTER INFO][For certain RP]
Height: 6 foot 6 inches 6 Centimeters
Wendigo form height: Roughly over 8ft and 5in.
Eye colour: Dull red, when angered it looks like Blood red. Whenever he shifts into that of a Wendigo his eyes turn fully black.
[CHARACTER APPEARANCE]
Weight: 185 lbs
Skin colour: Deep Tan
Distinguishing features: Ravnestad has scars littered about his body, the clear ones on his face is one the starts from his left ear to his chin, and another across his right cheek.
Build of body: Athletic, muscular
Hair colour: Gunmetal Grey, its his natural hair colour
Hair style: Wispy
Complexion: Somewhat clear, but scarred
Posture: Slouched
Tattoos: Too many to list, they are scattered in any visible place, and any non visible place as well.
Piercings: He has black gauges in both ears, and snakebites on his lower lip.
Typical clothing: Hardly will he wear disheveled clothing. When he does it's so he could go into certain areas or move around with more ease.
Is seen by others as: A drugee.

Likes: Not much, meat, being alone, no social contact.
Dislikes: Pretty much almost everything
Education: Hogwarts Eduction in Wizardry and Magic and whatnot.
Fears: Not many, and he wont tell you. Guess you'll have to find out on your own
General attitude: Asshole
Religious values: None
General intelligence: Quite High actually.
General sociability: He hates the word.

Illnesses (if any): Mental, actually:
Kleptomania= a recurrent urge to steal, typically without regard for need or profit.
IED (Intermittent explosive disorder)= a mental disturbance that is characterized by specific episodes of violent and aggressive behavior that may involve harm to others or destruction of property.
Sleeping habits: Sleeping? What's that?
Eating habits: Messy eater, no respect for table manners
Memory: Decent
Any unhealthy habits: Smoking, high drug use, alcoholic.

Parents: Don't. Bring. That. Up.
Siblings: -
Any enemies (and why): Everyone really, just because hes himself. "Its great."
Children: -
Friends: -
Best friend(s): -
Important friends/relatives (explain): No one is important to him really.
Love interest (if there is one): None.
Stephen James Model GIF from Stephenjames GIFs<script type="text/javascript" async src="https://tenor.com/embed.js"></script>" height="1500" width="1000">

Peaceful or violent: Violent, very much violent its horrendous.
Weapon (if applicable): His fists, a scythe, a garrote, maybe claws...
Style of fighting: Animalistic, dirty, street fighting, many styles he has.