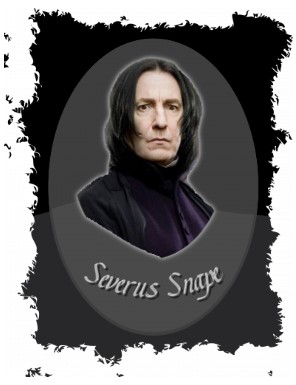 Severus Snape was mainly a Potions teacher at Hogwarts School of Witchcraft & Wizardry, He once took the job of being the Defense Against the Dark Arts teacher & even became Headmaster for a short period of time after Dumbledore's passing. Unfortunately, Severus Snape died during the Battle of Hogwarts. Snape is described as being very reserved, manipulative, strict, & has bitterness towards others. On the other hand, Snape is also very good at potion-making, he is determined to succeed, very loyal, & keeps his promises when made. If you share a birthday with Severus Snape, you may be good at Potions, Charms, & Defense Against the Dark Arts. Gilderoy Lockhart was mainly an author of many books, though he stole the adventures of others & credited it as his own. He also spent a year at Hogwarts School of Witchcraft & Wizardry teaching Defense Against the Dark Arts & started the Dueling Club for students who wished to learn defensive spells. Near the end of his year as a professor at Hogwarts, he accidently jinxed himself to not remember anything & ended up in St. Mungo's hospital permanently for no cure to a spell damage. Gilderoy Lockhart is described as being self-centered, a fraud, very reckless, & a coward. On the other hand, Lockhart is also a very proud person, clever in his schemes, & a good writer overall; despite what he wrote which was a scam. If you share a birthday with Gilderoy Lockhart, you may be good at Charms, Defense Against the Dark Arts, & Flying. Lily Potter was the mother of Harry Potter & was a Muggle-born witch. She attended Hogwarts School of Witchcraft & Wizardry & was a Head Girl as well as a member of the Slug Club. She married James Potter shortly after & had Harry. Unfortunately, Lily Potter died on Halloween night & was murdered by Voldemort. Lily Potter is described as being very talented, popular, responsible, & a leader. She also has a habit of speaking to others in a harsh tone when felt it was needed. She is considered brave for resisting Voldemort & strong-willed to stand up for what she believes is right. If you share a birthday with Lily Potter, you may be good at Potions, Charms, & Transfiguration.