Harry Potter is back at the Dursley's house one last time. Along with Professor Moody, Hermione, Ron, Fred & George, Bill & Fleur, Tonks & Professor Lupin, they take Harry to a safe-proof place. Professor Moody is killed upon the mission to move Harry. In Dumbledore's will, he gave Harry a Golden Snitch, Hermione got a book full of children's magical fairytales, & Ron is given the Deluminator. During Bill & Fleur's wedding, the Ministry of Magic has been taken over by the Death Eaters, & so the golden trio set off to find & destroy the rest of the Horcruxes. They find one of the Horcruxes but they can't seem to destroy it. While Ron holds on to it for too long, he starts to get angry & eventually leaves Harry & Hermione to fend for themselves. Harry & Hermione spend a good few months travelling to different places of the world & end up at Godric's Hollow, where they face Nagini the snake pretending to be Bathilda Bagshot. Harry & Hermione then travel to the Forest of Dean, where Harry discovers the Sword of Gryffindor & finds Ron. Using the Sword of Gryffindor, Ron destroys the Horcrux & they both head back to Hermione.

Now with the golden trio back together, they go visit Xenophilius Lovegood, Luna's father, to ask him about the Deathly Hallows. Upon hearing what the Deathly Hallows are, Harry discovers that Voldemort is trying to find the Elder Wand. Before they can make a plan, they are all captured by the Death Eaters & questioned at the Malfoy Manor. After a bit of dueling, the golden trio escape & break into Gringotts to retrieve the next Horcrux. They find Dumbledore's brother & enter Hogwarts through his secret passageway. Harry finds another Horcrux while Ron & Hermione destroy another with a basilisk fang down in the chamber. Voldemort murders Professor Snape & Harry retrieves Professor Snape's memories. In the Pensieve, Harry discovers that Professor Snape was a spy for Dumbledore in order to figure out what Voldemort was planning.

While the Battle of Hogwarts raged on, Neville Longbottom murders Nagini which is the last Horcrux. Harry & Voldemort meet & Voldemort kills the part of Harry that is linked to him. Harry pretends that he is dead & while Voldemort has his victory speech, Harry leaps up. Voldemort & Harry go into their last battle & Harry wins the battle with the Elder Wand in hand. After the Battle of Hogwarts, Harry destroys the Elder Wand once & for all so no one may never rise like Voldemort did. Nineteen years go by & the golden trio all say their goodbyes to their children who are on their way to Hogwarts School of Witchcraft & Wizardry for their first year. 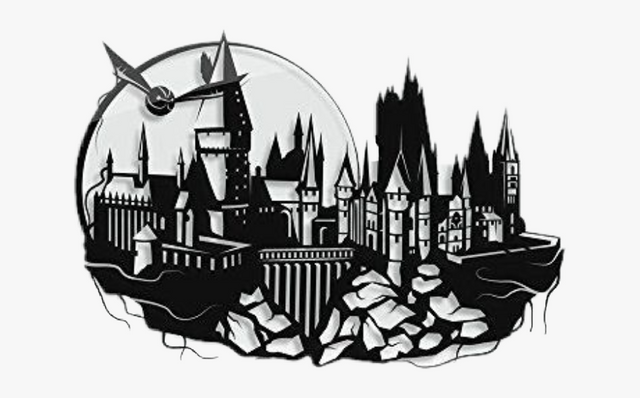 ⊱ In the book, the Dursleys say goodbye to Harry & Dudley Dursley thanks Harry for saving his life from the Dementors that night. In the film, there are no goodbyes that were made, however there is a deleted scene that shows Dudley thanking Harry. It should have been in the film since it was a good ending to the Dursley family.

⊱ In the book, it mentions that Tonks & Professor Lupin have a child named Teddy & Harry is the godfather. However in the film, there is no mention of this. I'm not sure why the director did not put this in the film.

⊱ In the book, Harry & Hermione does not dance in the tent. In the film though, they do. My guess is that the scene in the film represents their childhood & how it may be the last time they get to enjoy life before they face Voldemort.

⊱ In the book, Harry has the idea of using the Gringotts dragon to escape. In the film, Hermione says the idea. No one knows why this switch was done.

⊱ In the book, Peter Pettigrew dies due to Voldemort. Voldemort forces Peter to strangle himself to death. In the film however, we see that Peter lives. I'm not quite sure why this was the case in the film.

⊱ In the book, it mentions the story of Dumbledore, Gellert Grindelwald, & his sister Ariana. In the film though, Dumbledore's backstory is never mentioned. My guess is that the film would have been too long if the director created a side story for it.

⊱ In the book, Percy Weasley is frequently at the Battle of Hogwarts. In the film, Percy is no where to be found. No one knows why this is.

⊱ In the book, Hermione & Ron kiss in front of Harry. In the film though, they kiss in the chamber after they destroyed a Horcrux. My guess is that the kiss was more dramatic in the chamber & so they just went with it. Also, Emma Watson who plays Hermione Granger & Rupert Grint who plays Ronald Weasley were very nervous to do this scene together. They kept laughing at every take.